If there’s one thing you can count on from President Biden is he will inevitably stumble again.

During President Biden’s Veteran’s Day address at Arlington National Cemetary, he slipped up by referring to the late baseball player Satchel Paige as “the great negro.” Yes, actually said it.

Biden was honoring former U.S. Ambassador to Hungary Donald Blinken, an Army veteran and father of Secretary of State Antony Blinken, during his speech when he launched into a story about Paige, who played in the so-called “Negro leagues” before moving to to Major League Baseball in the late 1940s.

“I’ve adopted the attitude of the great negro at the time, pitcher of the Negro leagues, who went on to become a great pitcher in the pros — in Major League Baseball — after Jackie Robinson. His name was Satchel Paige,” Biden recalled.

“And Satchel Paige on his 47th birthday pitched a win against Chicago,” Biden continued. “And all the press went in and said, ‘Satch is amazing. Forty-seven years old. No one’s ever, ever pitched a win at age 47. How do you feel about being 47?’ He said, ‘Boys, that’s not how I look at it.’ And they said, ‘How do you look at it, Satch? And he said, ‘I look at it this way: How old would you be if you didn’t know how old you were?’”

Worlds Apart: Nancy in her Ivory Tower with her Network of Gilded Elites
Bannon Indicted Over Bogus Jan. 6 Charges

it’s a pattern. Whatever Democraps (used to be liberals, but most are now Communists) accuse Republicans (used to be Conservatives but many are now are criminals like the Democrat mafia) of being or doing is what the Democraps really are and what they are doing.
We had an opportunity to get ride of these sociopath criminals, but too many dead people voted and continue to vote.

Biden IS a racist. 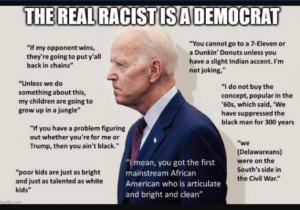 Nothing China Joe does is a suprize to me as I see him as a brain dead PUPPET of the Marxists running the “former” democrat party. 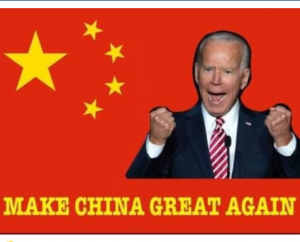 Obiden is only doing what Obummer instructs him to do.

True enough but Biden has always been a racist. Afterall he is a life=long member of the party of the KKK and Jim Crow.

racist globalists and all their racist puppets; $oro$ and chester biden and demonrats and rinos and media and libby snow flake sheep always attempt to make Americans believe that Americans are the racists . . . . .

I didn’t know the word “negro’ was on the banned list.

Needless to say, Biden must make sure that anything that he wants to speak about has to have been read and learned before he actually speaks! If he doesn’t do that, he certainly won’t be able to keep it all straight in his mind, and he’ll be dealing with endless errors!!

Biden would feel dight at home at a Klan rally.

Blubbering Biden is a total and complete asshole and an embarrassment to our country——–LETS GO BRANDON!!!!!!

Well what else would one expect from the most racist President ever elected. But the left will not think about this being racist after all it’s their boy. This is what the Democratic Party has been for a very long time. nothing new.

[…] Info on that Topic: thehollywoodconservative.us/articles/watch-biden-shocks-reporters-with-racist-gaffe/ […]