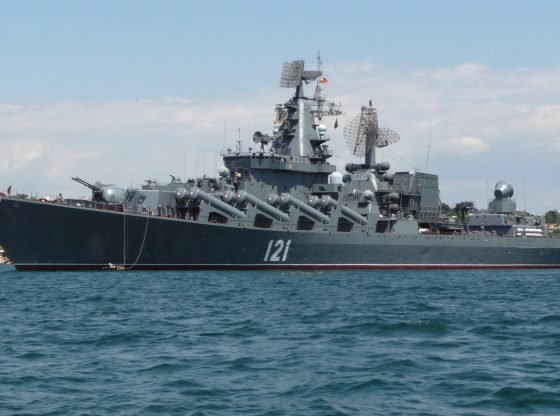 Via Paul Crespo of AAN:

Ukraine has taken credit for sinking a second Russian warship, the flagship of the Russian Black Sea fleet, the missile cruiser Moskva. Ukraine claims it struck the ship twice with its Neptune anti-ship missiles, apparently hidden in or around the strategic port city of Odessa.

Earlier in March Ukraine sank a Russian Alligator-class landing ship, the Saratov in port at Berdyansk.

Russia has asserted the latest ship was damaged in an accidental ammunition explosion.

This is the same 510-crew, 610-foot-long Moskva that led Russia’s naval assault on Ukraine and reportedly captured Ukrainian border guards on Snake Island after being told to “F*ck themselves” by the guards.

#war I think that the main conclusion from the destruction of the cruiser Moscow by a missile strike will be the miscalculations of the 🇷🇺Russian Navy in intelligence and, as a consequence, in the assessment of the 🇺🇦oppositional forces./1 pic.twitter.com/O5PSAr1WDn

The warship was a “symbol of Russian naval power in the Black Sea,” Michael Petersen of the Russia Maritime Studies Institute told the BBC.

According to naval expert Jonathan Bentham from the International Institute for Strategic Studies (IISS), the Slava-class cruiser was the third largest vessel in Russia’s fleet and one of its most heavily defended warships.

As Axe notes in Forbes, the Russian warship:

…was heavily armed with 16 fixed launchers for P-1000 anti-ship missiles, vertical tubes for 64 S-300 air-defense missiles and rail launchers for 40 Osa missiles for aerial self-defense, plus a bevy of guns. Torpedo tubes and a helicopter rounded out her capabilities.

The cruiser was equipped with a triple-tiered air defence system that, if operating properly, should have given it three opportunities to defend itself from a Neptune missile attack.

In addition to medium- and short-range defences, it could engage six short-range close-in weapon systems (CIWS) as a last resort. Mr Bentham said Moskva should have had 360-degree anti-air defence coverage.

“The CIWS system can fire 5,000 rounds in a minute, essentially creating a wall of flak around the cruiser, its last line of defence,” he said.

If the strike is proven to have come from a missile it “raises questions over the capabilities of the modernisation of the Russian surface fleet: whether it had enough ammunition, whether it had engineering issues”.

“Essentially, you’d have thought that with that three-tiered anti-air defence system it would be very hard to hit,” the military expert added.

If the Ukrainians did sink the Moskva with two Neptune anti-ship missiles, this was quite a feat. As Axe explains:

…the pre-war Ukrainian navy probably possessed just one Neptune battery out of the half-dozen or so it planned to induct this spring.

The Neptune system fires R-360 cruise missiles that fly at low altitude as far as 180 miles. The missile borrows its booster from the S-125 anti-air missile and uses an MS-400 turbojet for cruising. The radar seeker head has a detection range of around 30 miles.

A Neptune battery includes a truck-mounted launcher with four rounds, a command truck and a pair of resupply trucks plus links to a mobile Mineral-U radar with a 370-mile range.

If the Ukrainians really did hit Moskva with a Neptune or two, it means they first managed to cobble together, man and deploy at least one complete battery with all its supporting systems—all in the middle of a devastating war.

A veritable floating missile-battery, Moskva was the Black Sea Fleet’s best defense against Ukrainian attack. With her, the fleet still was vulnerable. Without her, it’s even more exposed to missiles, rockets and drones.

This country is beating, Russia with only limited weapons. And still, the White House won’t give them planes, scared of escalating the war, no,no.no. Putin has something on this no-hand shake guy sitting in the White House. Who is running the country, not wondering Lost Joe’. How the h this guy stayed in DC so long, isreally the story. Vote out every Democrat who is old enough to vote.