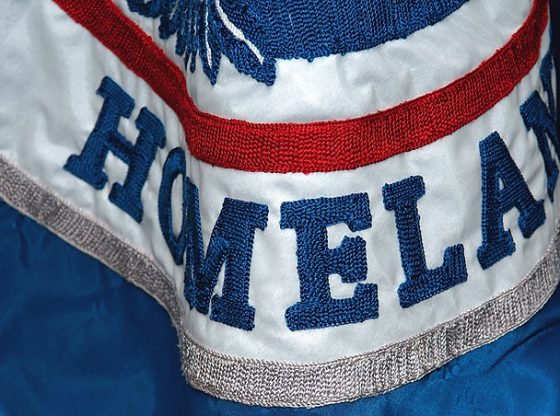 Washington, DC -- May 27, 2005 -- Detail of the Homeland Security Flag. This can be used on FEMA publications. Photo By Bill Koplitz/FEMA photo. Via Wikimedia Commons.
News |

Two Homeland Security workers have been charged over allegedly spying on and harassing political dissidents in the United States on behalf of the Peoples’ Republic of China (PRC).

Craig Miller, a DHS deportation officer who has worked out of Minneapolis, Minnesota, for the last 15 years, and Derrick Taylor, a former DHS law enforcement agent and private investigator in Irvine, California, were indicted on Thursday by a federal grand jury, alongside three other men.

“We will defend the rights of people in the United States to engage in free speech and political expression, including views the PRC government wants to silence,” said Assistant Attorney General for National Security Matthew G. Olsen, in a statement from the Department of Justice. “As charged, these individuals aided agents of a foreign government in seeking to suppress dissenting voices who have taken refuge here. The defendants include two sworn law enforcement officers who chose to forsake their oaths and violate the law. This indictment is the next step in holding all of these defendants responsible for their crimes.”

The other three defendants in the case are Fan “Frank” Liu, Matthew Ziburis, and Qiang “Jason” Sun. Liu and Ziburis were arrested previously in March, and were residents of New York. Miller and Taylor were arrested in June. Sun is a resident of the PRC and remains at large.

According to the relevant court documents, one of Liu’s co-conspirators allegedly retained Taylor to obtain personal information about multiple PRC dissidents living in the United States, including flight records, passport information and photographs. Taylor was allegedly assisted by two other DHS officers, including Miller. These contacts within the DHS allegedly obtained the information from a restricted government database and illicitly provided it to Taylor. Liu, Ziburis, and Sun allegedly used this information to target and harass these dissidents at the behest of the PRC.

The accused, if convicted, face decades in prison, with possible sentences for the defendants ranging between 20-30 years.

Chinese communist’s money bought the 2020 Election to install THEIR PUPPET, Impeach the entire Biden Administration for various acts of TREASON: ENERGY and the out of control BORDER—Just Two reasons to send them off the Guantanamo Bay for Military Tribunals and immediate hangings.

I wonder if they’ll receive the full J6 treatment. Probably fined a dollar and released. Holy mackerel, I wish our government would punish real criminals like these lefty spies instead of putzing around with politics.

Biden admin should be condemned and driven from office

Destroying America from within seems to be easier under the Biden Administration, as the Biden Crime Family Sleeps with the Enemy

The enemy within! That is how America fails and why are we allowing this to happen??
the Communists/Globalists have gained a firm foothold in 17 short months? They have always been behind the scenes but now they are out in the open and undermining our Constitution!