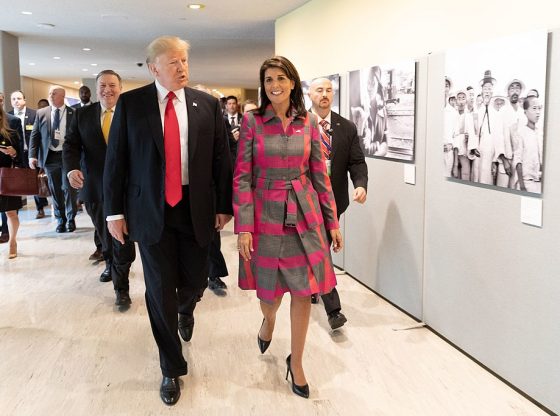 In a response to criticism by former Trump official Nikki Haley, President Trump Mocked her.

Trump noted that all of Haley’s criticisms usually lead to a retraction by her.

“Well, every time she criticizes me, she uncriticizes me about 15 minutes later,” Trump said. “I guess she gets the base.”

Haley did brutally criticize Trump after the January 6 riot at the Capitol. She said his words and actions will be “will be judged harshly by history,” and that his betrayal of Mike Pence “disgusted” her.

Months later, Haley said she would support Trump in 2024 if he decided to run. She has lavished him in praise in speeches since.

One major takeaway was Trump’s answer about DeSantis compared to what one Trump confidant said is Trump’s true feelings.

Vanity Fair did solicit the former president’s opinions about his would-be rivals. He was diplomatic when it came to DeSantis, saying in an interview that the Florida governor “is a good guy.”

That might not be entirely accurate. “Trump fucking hates DeSantis. He just resents his popularity,” a Trump confidant told Vanity Fair.

It will be interesting to see how 2024 plays out and how Trump ultimately classifies his possible opponents.

I like both Trump and DeSantis. BOTH are far better than ANYTHING the Democrats can give us.

I totally agree with DetroitDom !

[That might not be entirely accurate. “Trump fucking hates DeSantis. He just resents his popularity,” a Trump confidant told Vanity Fair.]

If you are on the wrong side of the Bell curve, you probably believed that…

I think Trump should take DeSantis as his VP for four years allowing DeSantis the road a possible future of being our President for the next 8 years. This will ultimately allow Republican rule for 12 straight years. This country will become greater than ever imagined and it will change the world forever.

Why weren’t things like this a big issue during the last DEMOCRAT primaries?

LISTEN UP….SamuraiQueen Does NOT Endorse NIKKI HALEY. SHE is TWO FACED. I like PEOPLE Who Have INTEGRITY and are NOT BACKSTABBERS. From SamuraiQueen. 😄😄😄

A Trump confidant uses language like that, and is so much a confidant that he/she is outing Trump making Trump look bad. Another swamp rat exposed. Now Trump needs to remove his/her “confidant” from his confidant circle. Sounds like another enemy has exposed him/herself if Trump can figure out who this swamp rat is. I am surprised the author of this article didn’t demand to make sure the unnamed “confidant” exists as an honest confidant to Trump. Is Vanity Fair a newspaper or a clothes catalog with an article or two thrown in .

[…] Read More on to that Topic: thehollywoodconservative.us/articles/trump-mocks-nikki-haley/ […]