Brian Stelter’s sudden ouster from CNN may have been driven by the political views of a major shareholder of the network’s corporate parent, according to a new report from the New York Times.

New Warner Bros. Discovery CEO David Zaslav has made headlines for the scythe he’s taken to a number of assets, including pulling the plug on the CNN+ streaming service shortly after its launch and dumping the new Batgirl movie during post-production, and the decision to drop the ax on Reliable Sources was likely driven in part by financial concerns in the wake of the corporate merger (and specifically the absorption of more than $50 billion in debt). Stelter alone was reportedly under a contract that paid him nearly $1 million annually for the show, newsletter, and a podcast.

However, Reliable Sources’ cancellation was motivated by more than just dollars and cents, according to a report by Times media reporter Benjamin Mullin — holding a job Stelter himself once had at The Grey Lady — that points to several key players within CNN’s new corporate parent.

“[L]eaders of CNN’s new corporate parent, Warner Bros. Discovery, have suggested that they want the network’s programming to have more straight news reporting and fewer opinionated takes from hosts,” wrote Mullin, pointing to both Zaslav’s desire to reshape CNN as “a network for both Republicans and Democrats” and comments from shareholder John Malone.

According to the New York Times:

John Malone, an influential Warner Bros. Discovery shareholder, said that he wanted the network to “evolve back to the kind of journalism that it started with” in an interview with CNBC last year.

That new focus seemed to put Mr. Stelter, who has been critical of former President Donald J. Trump and his treatment of the press, in possible jeopardy. On average, during that time slot, more people watched Mr. Stelter’s show in recent years than they did MSNBC, but fewer people watched it than Fox News, according to data from Nielsen.

In an email to The New York Times, Mr. Malone said that he had “nothing to do with” the cancellation of Mr. Stelter’s show. Mr. Malone said he wants “the ‘news’ portion of CNN to be more centrist, but I am not in control or directly involved.” 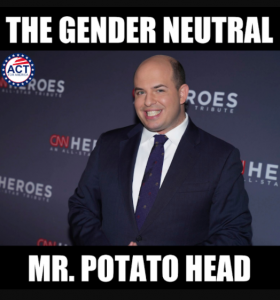 …and OTHER varieties of heads could certainly be suggested.