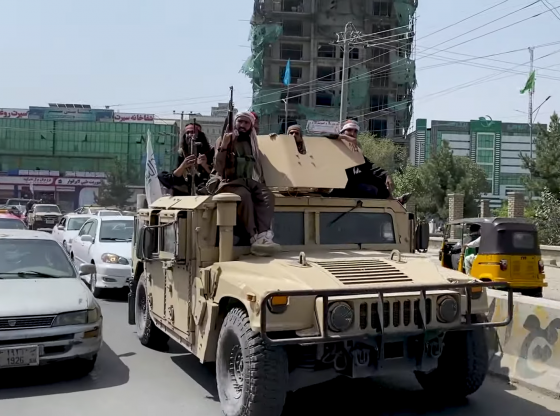 The Taliban have now taken a page from Joe Biden’s playbook and announced a mass confiscation of firearms in the city of Kabul.

JUST IN – Taliban are calling on the population in #Kabul to hand over all privately owned weapons and ammunition within a week.

Is it a coincidence that the Taliban, now that their victory in Afghanistan has been secured and the US is now leaving the country, are pressing for draconian gun control?

Or that Joe Biden and his Democrat allies would like to enact the same policy here in America?

Let us know what you think in the comments below.

I love your writing!!! Please keep it up😊

This is what tyrants do. Disarm the citizenry so they can more easily subjugate them. This is akin to Biden saying turn in your guns and ANTIFA and B.L.M. will protect you.

We just found all family members of the Taliban here in America it’s the Democrat party .

The whole goal of Islam is to inforce their Shariaw law upon the whole world by their false god I know that at one time through an CIA friend I was told that this is who that want to police America with that was when obama the second worse president we have ever had and this administration will do the things they are doing on purpose to distory us on the inside read between the lines now is the time to stop them from damaging us all by their radical take over playing politics with them will not work now is the time to impeach them all. If we wait we will not have a country any longer and we are forming a Jewish Christian party here in the USA to counter all attaccks on Jews and Christians and the true Constitution which formed this country in the beginning!

To quote an unknown author: “They can take my gun when they pry it from my cold, dead fingers”.

Joe Biden must like guns seems how he gave the Talibon 600,000 Military guns and a lifetime supply of ammo

Sleepy Joe Biden’s playbook? No, sweetie, Joe Stalin’s playbook, Chairman Mao, the Khmer Rouge and a host of other despots bent on destroying the Liberty of the subjects of the nation they took over.
Yeah, Sleepy Joe Biden wants to do that here. Hopefully the Afghan example will change the minds of some folk. We’ll see.

biden is a taliban.

Stolen elections in one and just plain theft in the other.

The first thing dictatorial govts do as they take over a country is “free” the people of any way they can defend themselves against govt intrusion on their lives. Islam is a political control theory over people and they use any excuse they can and law they can dream up to impose that control over their subjects including massive indoctrination and privileges handed out to those who help keeping the govt control going and out and out murder of anybody just perceived to be a threat to Islam goct.

Biden has clearly endorsed Islam to be taught in USA schools. TREASON.
Islam is not a religion as President Madison defined in original, therefore, those Islamists, Muslims hating USA Americans and our Constitution FOR USA cannot hide behind protection of Religion 1st Am.  Deport them all, IMMEDIATELY!

ibwant to make you president !!! hey I have a question. ok we have a COMMUNIST that stole a stint in the whitehouse. so why if a bank robber steals money and get a away whit it . Shouldbt that make the money his to keep. ??? what is worse bank robber with a few dollars or a communist stealing a country . I believe the country robber should be shot right ???.

If Biden and Dems get their way we will be disarmed and defenseless against them and anybody who tries to invade our country.

just don’t hand your over we are going to need them . real soon.

Jihad joe and the hoe are traitorous scum and must be removed from office. Then tried in a court of law. All others in government who commit treason should be held accountable

from the odd Sci Fi Novei The weapon Shops of Isher.
Circa 1950?