Radical Democrat Congresswoman Ilhan Omar is using the recent leak of a Supreme Court opinion draft to further her own agenda. Rep. Omar has publicly called to pack the Supreme Court in the past and is now using current events to dust off the played-out narrative in hopes of finally seeing some success.

“Overturning Roe would put the lives of women across the country at risk. It would fly in the face of decades of precedent and the overwhelming majority of public opinion. And they will not stop here. Expand the court,” Omar tweeted.

This isn’t the first time Omar and her progressive cohorts have attempted to push the narrative that the court is broken and can only be fixed by expanding its size.

“Expand the court,” Omar tweeted. “Remember that Republicans have lost 6 of the last 7 popular votes, but have appointed 6 of the last 9 justices. By expanding the court we fix this broken system and have the court better represent the values of the American people.”

Exactly one year after Barrett’s confirmation, Omar and other liberal lawmakers and activists held a rally at the Supreme Court, once again calling for congressional legislation to allow court-packing.

The commission’s report signaled a “profound disagreement” regarding the number of justices on the bench.

AMERICA repeats call to pack her in pig pen.

Omar is just following her master obama in fundamentally changing America. And like him, we don’t need her. She can go back to her Somalia and enjoy the freedoms there. We make a mistake when we bring these people over here and allow them to then govern us. They don’t want to help us, they want to change us to being what they left behind.

With a little luck, they’ll identify the leaker and abort it.

Democrats are true to their methods. If they can’t win within the limits of the rules, they seek to change them to their advantage. Democratic processes be damned. 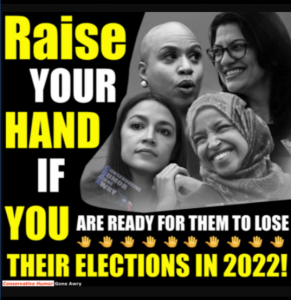 Again, who votes for these people? Stop and look at what they have done for you, All they do is say how bad our country is, why won’t she go back to where she was run out of. Now there is something I would donate to, her ticket.

Somebody please wrap her in a filthy swineskin and put her and her brother in the nosecone of a rocket bound for Venus. They will be much happier there.