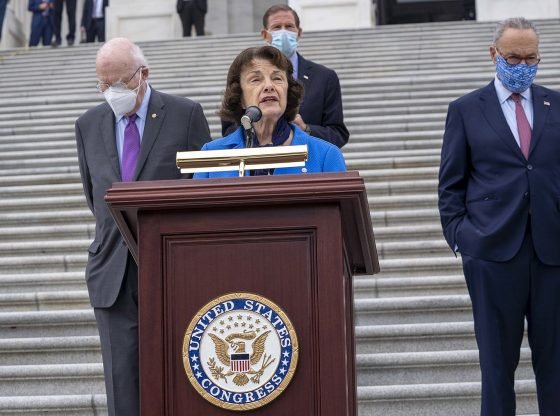 The longtime liberal newspaper ‘The San Francisco Chronicle’ recommended on Thursday that Senator Diane Feinstein (D-CA) resign due to her mental unfitness for the job.

The editorial board of the San Francisco Chronicle on Thursday called for Sen. Dianne Feinstein (D-Calif.) to resign, arguing its reporting shows she is mentally unfit to handle the job.

The editorial was published following an article from the newspaper that cited concerns about Feinstein’s mental fitness and memory recall abilities from three of her former staff members and four current U.S. senators, including three Democrats.

The editorial board of The Chronicle cited one instance from the report in which an unnamed Democratic member of Congress from California had to introduce themselves several times to Feinstein, 88, despite working with the senator for more than a decade.

“It remains impossible not to be troubled,” the editorial read. “If Feinstein’s mental fitness has indeed deteriorated to the point where it’s an open secret that she’s incapable of doing her job, Democrats need to forgo the jokes and say so openly.”

Feinstein attempted to defend herself from accusations of incompetence on Friday when she claimed that her recent mental mistakes were due to the grief caused by the passing of her husband.

Why aren’t they demanding Biden step down? What’s sauce for the goose…

That resignation will never happen. Democrats must have anyone called a Democrat in that seat, capable or incompetent. They did the same thing with the Presidency. Why not a senator?

All the blue states have to stick together. The democrats will never give up on those democrats that are out of their prime. Feinstein, Pelosi, Waters from California and Biden Delaware will never be forced to retire or resign.

It looks like some democrats are slowly waking up.

Diane Feinstein lost her husband so she is grief stricken but her mental state is not up to par and she should resign. We are sure that the Dems won’t let her resign even if she makes no sense anymore!

I was wondering which Democrat you were referring to? Nancy, Joe, anyone over 80 needs to go.

All democrats are mentally unfit. There is something seriously wrong in their brains. Just sayin

If that’s the case, all of the Democrats in CA should retire. There’s is nothing else they can do to mess up Ca, except rent everybody a U-Haul, and gas money to Delaware.