According to The Guardian:

The move to defy the subpoenas would mark the first major investigative hurdle faced by the select committee and threatens to touch off an extended legal battle as the former president pushes some of his most senior aides to undercut the inquiry.

The select committee had issued the subpoenas under the threat of criminal prosecution in the event of non-compliance, warning that the penalty for defying a congressional subpoena would be far graver under the Biden administration than during the Trump presidency.

But increasingly concerned with the far-reaching nature of the 6 January investigation, Trump and his legal team, led by the ex-Trump campaign lawyer Justin Clark the former deputy White House counsel Patrick Philbin, are moving to instruct the attorneys for the subpoenaed aides to defy the orders.

The basis for Trump’s pressing aides to not cooperate is being mounted on grounds of executive privilege, the source said, over claims that sensitive conversations about what he knew in advance of plans to stop the certification of Joe Biden’s election victory should remain secret.

However, separate reports indicate the January 6th panel has been unable to even locate one of the four Trump aides.

According to reports from CNN:

More than a week after subpoenaing former Donald Trump aide Dan Scavino to cooperate with its investigation into the January 6 riot at the US Capitol, the House select committee investigating the attack has been unable to physically serve the subpoena to him, according to multiple sources familiar with the effort.

The news comes just days before the committee’s deadline for Scavino and three other close allies of the former President to comply with subpoenas requesting documents by October 7 and a deposition by October 15.

The Trump officials should not give even a second thought to this communist egregious monstrosity known as The Subversion Committee 1/6!!

Investigate Pelosi! Jan 5 Capital secured by barriers Capital Police, Washington Police, National Guard! Who pulled the Barriers: Washington Police and why was the FBI involved with agents in the crowed, they are a DemocRAT run organization which committed criminal acts in the investigation of Russia involvement! Then look at the videos Capital police showing the way into the Capital and we saw the videos where there was no destruction and FBI all over the place! Why did not those FBI stop the destruction, hell. ANTIFA was there and showing how to destroy the building! Call Pelosi and make sure she is under oath it was her that was in charge! She failed and should be held responsible and she failed, just like Biden and his generals in Afghanistan and not one person taking responsibilities, Biden is the one that has connections in Russia, 3:5 million to Hunter and the payback was shut down iour energy and pipelines and giving Russia the pipeline and 1.5 billion dollars to Hunter plus a car and a 100 grand shopping spree and Biden’s payoff doing nothing to China when the COVID was not spread in China because they shipped their people all over the world and watched as the virus spreader and caused c everyplace except China!,

what a WASTE of EAX PAYER MONEY.
PELOSI is GUILTY OF TREASON; EXECUTE HER.

This is a stacked Kangaroo court and is meant for Pure Propaganda against Trump and any ‘R’ who runs for 2024.

LISTEN UP….The DEMOCRATS Can JUMP into a LAKE with CROCODILES. AMERICA is Going into a SINKHOLE under THEIR LEADERSHIP. From SamuraiQueen. 😄😄😄

Like teh fake Impeachments , now the fake accusations for something Pelosi, Schumer, Pence, McConnell organized with their CCP pals, now the woman has the cheek to try and un nerve President Trumps administration (again, again) The clone, body double, CGI or whatever is playing Pelosi can go pound sand

Have this communist bunch even arrested the Antifa participants that were there and on video breaking doors and windows! I say not because that would be arresting the communist democrats brown shirt army that has terrorized our country for over a year in cities like Portland.

Remove this communist puppet regime and exile them in Afghanistan! 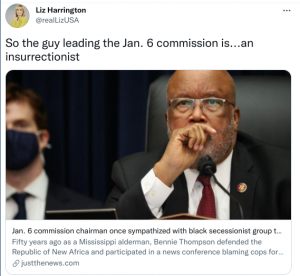 The democrat party and their stooge media are continuing to make a mountain out of a mole hill. An exaggeration if there ever was one. That’s right, the democrat party continues to tell us what their video footage of that day does NOT show. An insurrection? Give me a break!

[…] Read More to that Topic: thehollywoodconservative.us/articles/report-former-trump-officials-to-defy-jan-6-subpoenas/ […]