Progressive Democrat Congresswoman Ilhan Omar is asking Senate Majority Leader to “ignore” the Senate parliamentarian’s determination that Democrats cannot include a path to citizenship in their $3.5 trillion spending bill.

This ruling by the parliamentarian, is only a recommendation. @SenSchumer and the @WhiteHouse can and should ignore it.

We can’t miss this once in a lifetime opportunity to do the right thing. https://t.co/r1T7T7uQIP

Senate Parliamentarian Elizabeth MacDonough determined Sunday night that the provision fell outside the scope of what is allowed in a reconciliation bill – which cannot be filibustered, thus requiring the support of only a simple majority in the Senate.

MacDonough said the provision was “a policy change that substantially outweighs the budgetary impact of that change,” as it would change the immigration status of 8 million people. She also said it would raise the deficit by an estimated $140 billion over 10 years.

The parliamentarian also noted that if a provision granting a new immigration status to people could be done through reconciliation, so could a provision stripping such status.

“[P]ermitting this provision in reconciliation would set a precedent that could be used to argue that rescinding any immigration status from anyone – not just those who obtain LPR status by virtue of this provision — would be permissible because the policy of stripping status from any immigrant does not vastly outweigh whatever budgetary impact there might be,”  MacDonough said.

Senate Leader Schumer has said that while he is “deeply disappointed” in MacDonough’s recommendation Democrats are preparing alternatives o get their agenda passed.

Up yours Omar! Anti-Semitic c—s like you should resign!🖕 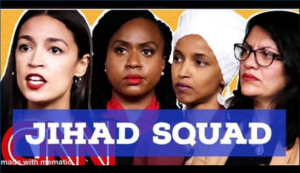 Of course, this brother marrying communist democrat doesn’t want to use our Constitution and Bill of Rights as they get in the way of the communist democrat cult party agenda of destroying our America.
There are too many fools voting these corrupt pedophile loving communists into offices and all of these fools need to Love America, or Leave it.
period.

Anyone left who has not had it up to here with this illegal alien legislator? She needs to be tied in a burlap bag and thrown overboard on her deportation trip to Somalia.