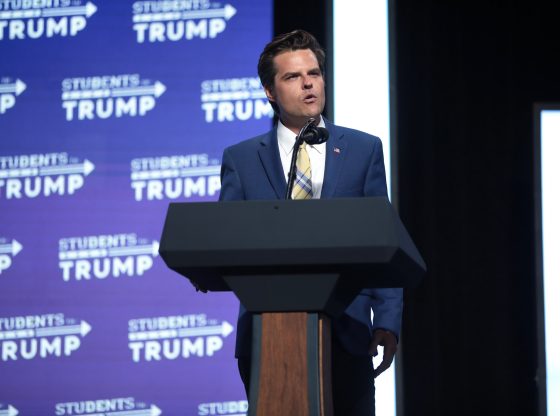 Rep. Matt Gaetz and Biden Defense Secretary Lloyd Austin clashed during a heated exchange over wokeism in the military and socialism.

In his questioning, Gaetz referred to an article published in the conservative Washington Free Beacon in February that reported that economist Thomas Piketty, whose work focuses on economic inequality, would give a lecture at the institution about ”the case for global justice and democratic socialism” to combat China.

Austin said he was unaware of the lecture Gaetz was talking about, prompting Gaetz to retort that it was “widely reported.” The Florida Republican then asked the Pentagon chief if he agreed that socialism was not an effective way to combat China.

Wokeism has no place in our military. Our military needs to be properly trained to be the combat force that it is supposed to be. Enough with the imagined genders and all that other nonsense! There are two genders: male and female. This is a biological fact and nothing that anyone imagines will change that. The military needs to concentrate on the strategies and tactics to protect our freedoms and way of life. Leave the “pronoun training” and other silliness to the confused folks who cannot and should not make it into the ranks of a properly trained and empowered military.

In today’s military, the training should start at the top. All we got is 4 stars yes men. I feel sorry for the active-duty members of today.

The next year to 3 years will be critical to turning our country around or we will end up like Ukraine where there is devastation everywhere, done by our enemies . Trash like Austin and Milley have to be retired permanently and soon.
I learned about yes men in companies I worked at when I was in my teens. Yes men are repulsive. There is no room for yes men in the military, period.

First, why is the admitted traitor Milley not behind bars? Secondly, Milley committed his treason with his counterpart with China so of course he is in favor of indoctrinating our troops with communist propaganda!! Austin, he is just a puppet reciting the unwoke mantra to destroy our country.

Lloyd Austin was appointed as the Secretary of Defense so President Sleepy Dementia riddled Joe Biden could check off another box to put a black man in the position. I’m surprised he didn’t pick a black woman like he did for the Supreme Court.

Wonder how these appointees feel about getting their position by color? No, I am not against blacks, I just know, that most Blacks would like to get a position by qualifications, not by some knot head trying to make points. I think they just want a level field.

This is an embarrassment to any Americans who value the servicemen and women of our great yet becoming more inferior each day country. It is past time to change our direction and lack of leadership.

Austin tried to cut in on Mr. Gatez, instead, every time he tried he just screwed up more. Where did this guy come from? Never heard of him, however, the Real Generals and Admirals of the past, would not claim these politicians in a uniform of today, let alone Sec of the Military. Looks like to get his cabinet, Mr. Biden looked for the most unqualified and appointed them, thinking their stupidity would make him look good. Even Obama paid more attention to Kamala than he did to Sleepy, sleepy looked like a dear in the headlights look.

I wish it were not so but Matt is correct. Our military forces are drowning in leftist liberal mantra while Austin crows about America’s military strength. But we’ve not kept up with China and North Korea where a variety of hypersonic missiles have been tested. And Russia decimates Ukraine. And the Taliban dominate and torture in Afghanistan. And ISIS has returned to full function. And the UN sits. NATO debates. At the end, our military uses Russian oil and the CIC (Coprolite in Chief) begs fuel from our enemies.

So many wrong calls by the military leaders Biden appointed. Now they are rooting out anyone who is a patriot. Transgenders do not belong in the military for one reason, ongoing medical treatment. Diabetics, epileptics, and anyone depending on medical treatments to live a normal life are banned. The trans crowd want special treatment not afforded to anyone else.