Psaki Gets Slammed After Claiming Republicans are ‘Rooting for Inflation’

Psaki made the remarks in reference to a report from The Wall Street Journal below:

Republicans argue the Democrats’ social-spending bill would aggravate inflation by injecting trillions of dollars into an overheated economy. They say they see these issues as powerful political arguments heading into next year’s midterm elections, when Mr. Biden’s party is at risk of losing legislative power.

In a tweet, Psaki claimed: “Q: Why, when Americans are seeing higher prices, are Republicans united against a bill to lower core costs on prescription drugs, health care, child care, and elder care? A: They’re rooting for inflation.”

Steven Rattner, a top economic adviser in the Obama administration warned in an op-ed in The New York Times this week that President Joe Biden’s Build Back Better agenda, which is what Psaki was referencing, would increase inflation:

So the administration should come clean with voters about the impact of its spending plans on inflation. Build Back Better can be deemed “paid for” only if one embraces budget gimmicks, like assuming that some of the most important initiatives will be allowed to expire in just a few years. The result: a package that front-loads spending while tax revenues arrive only over a decade. The Committee for a Responsible Federal Budget estimates that the plan would likely add $800 billion or more to the deficit over the next five years, exacerbating inflationary pressures.

It wasn’t long before Twitter erupted over Psaki’s deranged claims.

2. this inflation is only short term

3. actually the inflation is good because it means Joe Biden saved the economy

4. evil republicans are rooting for inflation 👿 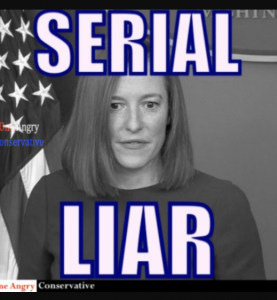 globalist puppets demonrats and rinos and media NON mentality, let’s blame all our intended failures on the republicans and Americans . . . . .

[…] There you can find 93571 more Information to that Topic: thehollywoodconservative.us/articles/psaki-gets-slammed-after-claiming-republicans-are-rooting-for-inflation/ […]

[…] There you can find 9567 additional Information on that Topic: thehollywoodconservative.us/articles/psaki-gets-slammed-after-claiming-republicans-are-rooting-for-inflation/ […]

[…] Read More on that Topic: thehollywoodconservative.us/articles/psaki-gets-slammed-after-claiming-republicans-are-rooting-for-inflation/ […]