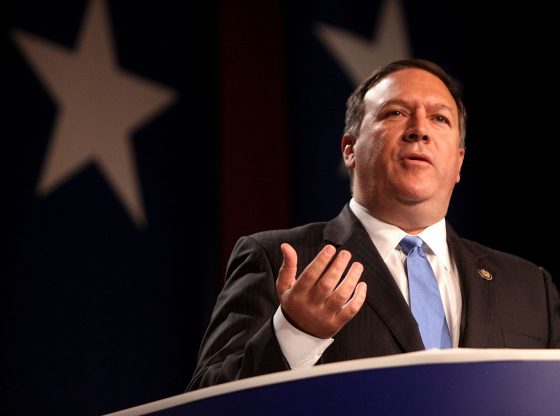 Former Secretary of State Mike Pompeo slammed President Biden after he attempted to insinuate that the current debacle in Afghanistan was somehow due to the actions of former President Trump.

MIKE POMPEO: We were clear with the Taliban that we had this understanding–but you were going to live up to it. And we had a conditions-based withdrawal plan and we executed that. We were down from about 15,000 to a little over 2,500. And for the last 13 months of our administration, we didn’t have a single American attacked or a single American killed.

It wasn’t because of the piece of paper, that was the set of understandings. It was because the Taliban understood that if they acted against Americans and took on actions that were inconsistent with what they had promised to do, we’d respond and we did. We did it multiple times. When they pushed on us and the Trump administration, we responded with American power and American might, and we made clear to the Taliban that deterrence was going to be maintained. The difference was when the Biden administration came in, when the Taliban pushed, they withdrew. They showed weakness. The Taliban rolled it up. They put our military in an incredibly difficult position because they weren’t prepared to defend the conditions and then decided to withdraw when the conditions weren’t right.

Both Pompeo and Trump have spoken out in recent days to decry the Biden Administration’s handling of the Afghan withdrawal.

No matter what it is, or what it means, or what it concerns, or what it may entail, the “democrat” way is to
blame someone else, or some other thing It has been true for years. They do not want to take any blame or
responsibility for anything that they have done.

Biden is a typical CRY BABY. He never has been able to accomplish diddily squat on his own and everything he has touched has turned to fecal matter. He’s a cry baby who just can’t take responsibility — it’s always “someone else’s fault”. We need a man in the White House who is intelligent and can accept RESPONSIBILITY!! (and Harris is certainly NOT IT)

The POTATOE! HEAD! SOCK PUPPET! and the ” KENYA BOY’S ” MENTAL DE! RANGE BI#CH! & THE STAFF! CIRCUS OF CLOWNS! BOWS DOWN TO TERRORISTS! & FLOODS THE COUNTRY WITH ILLEGALS INFECTED WITH THE VIRUS! FAST TRACK TO DESTROY AMERICA! WAY TO GO! POTATOE! HEAD!

We did it multiple times.

That was the set of understandings.

LISTEN UP….TERRORISTS. Hear My WORDS. A MAN Without HONOR is NOT a MAN. From SamuraiQueen. 😄😄😄

globalist puppets are men without honor .

globalist puppet chester biden will continue to preach all the globalist agendas to destroy America .

Biden has been a ward of the government for 50 years, all he has EVER been is a finger pointer and a corrupt thief, willing to sell America to the highest bidder

Simply put–Biden is an ass!!

STOLEN ELECTIONS have consequences. Biden is not president, he is the result of a coup orchestrated by the Democrap Party. Conservatives all over the US should start small groups to meet out justice.

Pat A Combs
Reply to  duke

Awaiting approval is what yahoo is telling me. Another example of the corrupt media censuring people illegally. I am sure they won’t post my comment. This is why I am not on Facecrap or S=itter.

The real truth is Biden doesn’t know a damn thing about what he is doing other than make a fool of himself. He is as stupid as Hunter!

48 years in politics have taught Joe a few things: how to steal from taxpayers, how to line his own deep pockets, how to deflect responsibility, how to blame others for his own blunders, and most of all: how to LIE. Alas for the brain-dead electorate who considered him a viable choice! Donald, thou shouldst be present at this hour!

Biden knew exactly what he as doing. I wouldn’t put it by him if he made a deal with China. And talaban and left all of that equipment. So China can swoop in and get their hands on their minerals. Biden had blood on his hands and needs to be brought up on treason

Apparently none of the children running Old Sniffy`s administration are capable of pouring urine from a boot with instructions on the heel. What a clown show.

tion, we responded with A