Pelosi Instructs U.S. Athletes to not Speak Out Against Chinese Communist Crimes Against Humanity

House Speaker Nancy Pelosi told U.S. athletes on Thursday that were attending the Winter Olympics in China to ‘compete’ and not to ‘risk incurring the anger of the Chinese government because they are ruthless.’

House Speaker Nancy Pelosi on Thursday urged US athletes competing in the Beijing Winter Olympics to keep mum on China’s human rights abuses because the country’s government is “ruthless.”

Pelosi issued the warning during testimony at a Congressional-Executive Commission on China. She acknowledged the US has a moral obligation to condemn the rights violations – but insisted the Olympic games were not the proper venue for athletes to voice their concerns.

But addressing athletes, she added: “Do not risk incurring the anger of the Chinese government because they are ruthless.”

Human Rights groups have repeatedly criticized the Chinese Communist regime for its’ consistent record of violating human rights, in particular the rights of the Uyghur people, which many have compared to genocide.

Pelosi is an evil c–t, IMO! 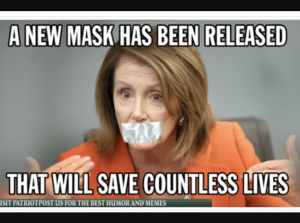 She just needs to get on her broom and leave town…….better yet the country!!!

YES. Gag the wicked, withered old HAG. We are thoroughly sick of her diatribes such as ‘We ALL belong to the Government.’ and ‘We’ll have to pass it so you can find out what’s in it.’ Diarrhea of the mouth and constipation of the brain! And the morals of a monkey!

Ignorance coming out of Washington again