On Sunday’s CNN “State of the Union” Nancy Pelosi claims she did not “rebuke” radical socialist “Squad” member Rep. Ilhan Omar (D-MN) after the second-term congresswoman yet again made anti-Semitic comments and shared a video labeled an anti-Jewish terrorist organization.

Pelosi downplayed a split between Democratic leadership and the progressive “Squad” over the remarks which some interpreted as equating the US with Hamas and the Taliban.

“We did not rebuke her,” Pelosi (D-Calif.) told Dana Bash on CNN’s “State of the Union.” Pelosi and 11 other House Democrats had penned a letter to Omar asking for clarification – and they “thanked her” after she issued a clarification, the speaker told Bash.

“The congresswoman, Omar, is a valued member of our caucus,” Pelosi said.

High-profile progressives like Rep. Alexandria Ocasio-Cortez (D-NY) had stood by Omar and called out House leadership in tweets, with AOC lamenting “intentional mischaracterization” and “public targeting” of Omar from within the caucus.

Bash followed up, asking “So do you want people to let it go on and just move on?”

Pelosi is a hypocritical b–ch! 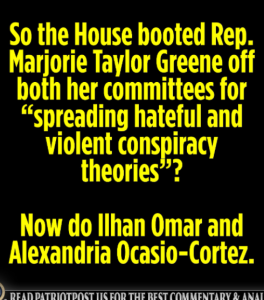 As much as the press LOVES to play up Republican squabbles to make it seem like division in the GOP, they try to play DOWN(if not ignore) similar(let alone BIGGER) squabbles when the DEMS are locking horns.

[…] Read More on on that Topic: thehollywoodconservative.us/articles/pelosi-desperate-to-downplay-spat-with-ilhan-omar-squad/ […]

[…] Here you can find 66865 more Information to that Topic: thehollywoodconservative.us/articles/pelosi-desperate-to-downplay-spat-with-ilhan-omar-squad/ […]