“Make no mistake — The threat of bringing masks back is not a decision based on science, but a decision conjured up by liberal government officials who want to continue to live in a perpetual pandemic state,” McCarthy tweeted Tuesday night.

“That’s the purview of the Capitol Physician … the mandate from him. I have nothing to say about that except we honor it,” Pelosi told reporters outside the Capitol.

McCarthy and Pelosi have been on tense terms recently after Pelosi rejected two Republican nominees to the Jan. 6 select committee. The move prompted McCarthy to swiftly yank all other remaining Republicans from the panel. Pelosi then appointed another pro-impeachment to the panel to claim the committee is bipartisan. 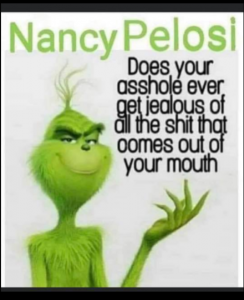 So in the words of nanci pillooser “vaccines don’t work, mask up” as the communist democrat cult party is allowing and spreading infected illegal insurgents across our country!

I agree with Senator McCarthy. All she wants is to keep a pandemic in perpetuity so the radicals can keep everyone under their authoritative rules and regulations. She should remember that she resides in the People’s House and should be helping not hindering the people who put her in that House. She hasn’t done one good thing for her constituents in California or any other part of the Country. All Pelosi wants is PURE and ABSOLUTE POWER. Biden has no say so in this Administration. She rules the roost just like her father did with the MAFIA.

Just pour yourself another shot, you drunken sot!