Things appear to be going from bad to worse for Climate Czar John Kerry. It was recently revealed that Kerry gave Iran information on Israeli Operations in Syria.

The information Kerry gave Iran’s Foreign Minister was news to Iran, they had no idea.

A new report on Thursday night revealed that Iranian Foreign Minister Mohammad Javad Zarif seemingly had no idea that Israel was behind hundreds of attacks on Iranian assets inside Syria when former Secretary of State John Kerry allegedly disclosed that information to him.

The New York Times, which published a report at the start of the week on the leaked audio, buried at the bottom of their report:

Former Secretary of State John Kerry informed him that Israel had attacked Iranian interests in Syria at least 200 times, to his astonishment, Mr. Zarif said.

Washington Free Beacon reporter Adam Kredo obtained the audio file of the leaked call and had it independently translated. The translation revealed that, according to Zarif, he had no idea that Israel was behind the strikes.

“Kerry told me that Israel had launched 200 airstrikes against you [Iran],” said Zarif.

John Kerry was giving state secrets to the largest state-sponsor of terror in the world. To make matters worse it was information they did not know about our biggest ally in the region.

Trump Won Her District Twice, Now Cheri Bustos is Retiring
[WATCH] FBI Raids The Wrong Home! What Is Going On?

TACO? YOU DON’T KNOW ME! SO I WILL CLUE YOU IN! I SERVED MY COUNTRY IN VIETNAM! WHAT DID YOU DO? I DIDN’T SERVE MY COUNTRY TO HAVE A DICTATING POS! FRAUD LIKE BY! DUNG! DESTROY OUR REPUBLIC! THIS COUNTRY OWES NOTHING TO THE WOKE! A! HOLES ! IF YOU DON’T LIKE OUR CONSTITUTION? PACK YOUR SH#T! & LEAVE!

I was in Vietnam, Kerry was in Vietnam. I served with honor in the Marines, Kerry lied about us and became a turncoat. Why should this not still be expected of him? Kerry is a Faithfull lapdog for Iran and all of their hate for Israel. He gave them the eventual right to build nuclear weapons without approval by Congress as a treaty, refusal to address the illegal ICBMs, make any demand to release an innocent American, and the $billions he allowed as well as pallet loads of non-traceable international money in the dead of night says it all. He should be arrested and tried as a traitor to America.

Ketchup Kerry is more of a traitor than was that poor misguided Jane Fonda—because Kerry broke the oath he took. May Kerry’s slow march to hell—be a gruesome one.

Semper Fi! I agree too many of our service men lost their lives in Nam and turncoats got rich, nephew was in Nam also, Thanks for your service from an Army Brat.

I thought that traitors were shot. Semper Fi.

This is treason and if we had an honest and fair administration, instead of a bunch of tyrannical communists, he would be dealt with.

I wish the last administration dealt with him. He clearly violated the Logan act. Yet the DOJ did nothing. Like Sgt Schultz – see nothing, say nothing, do nothing.

Why hasn’t a Mossad employee invited him over one evening for brandy and cigars?

He need’s to Resign ASAP he can’t be trusted. He’s spying for the Enemy.

This fkg traitor, needs to be removed from his job,then arrested for treason, He did the same thing in vietnam, and needs to be held acccountable. That’s a firing squad. 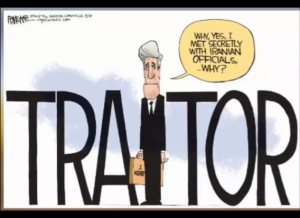 and indict him for High Treason

KERRY HAS A FAT MOUTH AND NEEDS TO LEARN TO SHUT IF HE IS GOING TO SURRIVE AND HOLD THAT DAMN TONGUE OF HIS. BUT THEN HE IS A DEM LIBERAL AND THEY ALL SHOOT OFF THEIR MOUTHS- SCUM BAG.

Worthless traitor! Kerry should be in a prison somewhere….the filthiest, the better. Remember, that scum was in Vietnam once!

The American people rejected Kerry for president in 2004. One would think, that was just a hint of how Americans feel about this political reject. Kerry sould be fined and put in prison for terminal stupidity!

His daughter is married to an Iranian!

Lurch Kerry got a sliver on his wooden PBR in Nam. Turned on his fellow vets in Nam, gave away state secrets to the Iranians, and now lord knows what he’s up to, should be facing a firing squad. No last smoke and no blind fold. Want him to see it coming.

As one of the Vietnam vets he betrayed, I’d rather he knew it was coming, but not when. Every second of his life he should fear the shot to the back of his neck…but I’d settle for your solution if I could be on the firing squad.

Thanks to all my fellow vets for their service and our fellowship.

ENERGY CZAR! LURCH THE HIPOCRIT! MARRIED TO THE KETCHUP QUEEN worth about 100! Mil! And they own a FLEET! OF CHARTER! JETS! YET THIS BY! DUNG! SWAMP! PUPPET PREACHES TO UP ABOUT CLIMATE? JUST ANOTHER MEMBER OF THE BY!DUNG! IDIOT CABINET!

[…] Information on that Topic: thehollywoodconservative.us/articles/new-bombshell-drops-on-john-kerry/ […]

[…] Information to that Topic: thehollywoodconservative.us/articles/new-bombshell-drops-on-john-kerry/ […]

[…] There you will find 33082 more Info on that Topic: thehollywoodconservative.us/articles/new-bombshell-drops-on-john-kerry/ […]