Dyson purportedly made the remarks about Virginia Lieutenant Governor-elect Winsome Sears, a Republican, who won her election on Tuesday night as Republicans dominated across the state.

The problem is here they want, they want white supremacy by ventriloquist effect. There is a black mouth moving, but a white idea through the, running on the runway of the tongue of a figure who justifies and legitimates the white supremacist practices. We know that we can internalize in our own minds, in our own subconscious, and in our own bodies, the very principles that are undoing us. So, to have a black face, speaking in behalf of a white supremacist legacy is nothing new. And it is to the chagrin of those of us who study race that the white folk on the other side and the right wingers on the other side, don’t understand this is politics 101 and this is race, not even 101. What’s beneath 101? It’s the it’s the pre-K of race, you should understand the fact that if you tell black people, look, I support a negro Look, there is a person of color that I am in favor of and that person of color happens to undermine and undercut and subvert the very principles about which we are concerned, you do yourself no service by pointing to them as an example of your racial progressivism.

What pathetic,sick,people. The dumbocrap party is a very racist party, that continues to destroy their own party, and america with their sick,racist, attitudes, if someone doesn’t agree with them, then they have to play the only card they have, and that is race card, sorry that doesn’t work any more. Your troubles are just beginning, u have no idea what karma is heading your way. Get ready, it isn’t going to be pretty, losing the house,senate, and presidency, is coming your direction.

Ms Reid for some reason has either forgotten or is just completely ignoring the fact that this is the United States and we have Freedom of speech and thought. It’s plainly stated these rights in the Constitution. If she doesn’t believe in the Constitution and the rights giving us , she could always leave and begin a better life in another country.

Hey Mike, Did u forget what she is? Besides sick, she is a racist as are a lot, not all, but a lot of dems & they hold that card close to their hearts(???).

The progressives simply will never understand Black Americans. They still believe that Blacks need their help because they are unable to help themselves. That attitude has a long history and we should not forget but there are others who know that God created all humans and we are all equal. If given the opportunity, all races can thrive in this country.

I want both of these racist scumbags fired. Enough is enough! 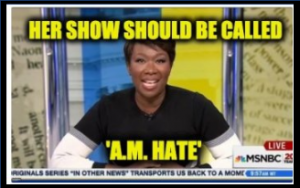 Old joe is not your ordinary dike–she is a communist useful idiot.

Pathetic victimhood…Grow up!
Character…Remember…forget color…look at your character, and that sir, shows that you are a racist! Chip on your shoulder? MLK remember him?…You stand for quite the opposite…spewing hate, division, and poor me instead of unity and love for all mankind with red blood! Stop the color division…..

The Democrats were the lying pigs who fought a war to keep black slaves, created and participated in the K.K.k., fought for segregation and were responsible for Jim Crow.

They lost the horrible war but many have never lost their racist mentality.

They now they have been teaching anti white racism in schools for years.

To accuse Republicans of white supremacy and systemtlic racism shows how desperate and delusional their psychopathic minds have become.

Truly there are many arrogant narcissists with great power roaming the halls of the U.S. government.

They must be purged through fair democratic elections.

Fair democratic elections must be reinstated to a point where it looks a little credible at least.

The Democrap party and the MSM compose the largest group of racists in America.

This is because the communist propaganda networks are also very racist and are the puppets of the communist democrat pedophile cult member party!

99% of the racism in America is driven BY THE MEDIA to drive up their numbers for the advertisers.

It also FEEDS THE NEEDS OF THEIR EGOS.

Their biggest problem is their propensity to actually BELIEVE their own lies.

It’s ALL ABOUT MONEY AND CONTROL OF THE NARRATIVE.

Great if they succeed in destroying their Party! These two are the most sickening evil Racists I have ever seen since coming to this Country 55 years ago!

CNN CROOKED NETWORK NEWS AND THEIR MENTAL STAFFS SHOULD MOVE TO VENEZUELA AND SEE EXACTLY WHERE AMERICA IS HEADING UNDER JOEBAMA BIDEN WORST ADMINISTRATION EVER,THEY MAKE JIMMY CARTER LOOKS LIKE A CHOIR BOY;DIXIECRATS/DUMMERCRATS ARE THE SUNS AND DAUGHTER OF LUCIFER….GOD DON’T LIKE UGLY.

Reid continues to prove how she has some serious mental problems. No doubt that she is a racist and literally hates white people but also she wants to control Black people who don’t walk in lockstep with her and her own twisted socialist/communist anti-American beliefs. She is so consumed by hate that it utterly controls and consumes her. She Has no credibility and is totally irrelevant. No wonder her ratings are in the toilet where they belong.

In reading these comments I can only say, “How sad!” Not much truth expressed here. BUT always remember, the truth will set even you all free!”

Will this horror from these despicablly racist people ever stop? Our country is disappearing before our eyes. Terrifying.

Lieutenant Governor-elect Winsome Sears states to work hard and you will succeed, which, she did. As an immigrant she professes love for the USA. Nothing racist about those things.

So now according to someone insignificant named Joy, you are racist if you do not support a Black American run for public office. And you are also racist if you do. No wonder the USA IS CRASHING TO THE GROUND, with people of this MENTALity running the show. If only she could learn to Read and comprehend.

[…] Here you will find 79114 more Info to that Topic: thehollywoodconservative.us/articles/msnbc-host-joy-ann-reid-and-guest-unleash-racist-tirade-against-black-republican/ […]

[…] Information to that Topic: thehollywoodconservative.us/articles/msnbc-host-joy-ann-reid-and-guest-unleash-racist-tirade-against-black-republican/ […]

[…] There you can find 21036 more Info to that Topic: thehollywoodconservative.us/articles/msnbc-host-joy-ann-reid-and-guest-unleash-racist-tirade-against-black-republican/ […]

[…] Find More to that Topic: thehollywoodconservative.us/articles/msnbc-host-joy-ann-reid-and-guest-unleash-racist-tirade-against-black-republican/ […]