According to a stunning report contained in the new book “Peril” by Bob Woodward and Robert Costa, General Mark Milley was allegedly plotting against then Commander-in-Chief, President Donald Trump with his Chinese counterpart.

In a pair of secret phone calls, Gen. Mark A. Milley, the chairman of the Joint Chiefs of Staff, assured his Chinese counterpart, Gen. Li Zuocheng of the People’s Liberation Army, that the United States would not strike, according to a new book by Washington Post associate editor Bob Woodward and national political reporter Robert Costa.

The first call was prompted by Milley’s review of intelligence suggesting the Chinese believed the United States was preparing to attack. That belief, the authors write, was based on tensions over military exercises in the South China Sea, and deepened by Trump’s belligerent rhetoric toward China.

“General Li, I want to assure you that the American government is stable and everything is going to be okay,” Milley told him. “We are not going to attack or conduct any kinetic operations against you.”

In the book’s account, Milley went so far as to pledge he would alert his counterpart in the event of a U.S. attack, stressing the rapport they’d established through a backchannel. “General Li, you and I have known each other for now five years. If we’re going to attack, I’m going to call you ahead of time. It’s not going to be a surprise.”

Many conservative commentators weighed in on social media to discuss the obvious implication that if the allegations about Milley are true then his behavior may have been openly treasonous:

If General Milley really held secret meetings to undermine his Commander-In-Chief, how is that not treason?

If Woodward is accurate, General Milley conspired against President Trump, and in effect installed himself as the de facto Commander in Chief post-election. Meanwhile, he alerted his Chinese counterpart.

I would like to volunteer for the firing squad that executes Teaitor Milley.

Time for an Article 32 hearing for this traitor.

There was a time i considered there would be 1,300 traitors hanged—that number has become (at least) 13,000; arrested, set to appear before a Military Tribunal where sentence can be performed within 72 Hours.

Milley committed treason,what a no good traitor, I knew this incompentent, pos was as crooked as they come. Time for this dirtbag , traitor in chief, needs to be removed , then arrested for treason,and espionage. He proved what a piece of work , this unstable nut=case really is, he undermined everything Trump tried to do.

This sounds criminal and if it could be proven ol’ silly Milley needs to be brought up on charges of conspiracy against his former Commander in Chief and if guilty then he should get the severest sentence possible.

Hanged within 72 Hours of his conviction—and all assets seized.

Article 32 hearing is in order.

There are numerous countries around the world whose governments would have a general that pulled a stunt like that stood up against a wall or next to a hole in the ground and shot.

Go no further than Communist china where such as he would not see the light of another day.

(OFF TOPIC) So before all the California Ballot Harvest videos show up on Bitchute who wants to make a betting pool of how much they cheat to keep Newsom from getting recalled. (ON TOPIC) Trying to avoid Nuclear War from happening by talking down the Ultra Control Freak Red Chinese is not treasonous so while there a lot of people in Washington D.C. that need to be brought before the Committee on Unamerican Activities this one seems way down the list . Letting Red China steal all our nuclear bomb plan s “Clinton” probably this doubtful.

If gag’ing Newsom does not go down like a rock—an AUDIT IS IN ORDER, AS NO ONE CAN HANDLE the big lie that ballot HARVESTING can reap.

The dumercrates can never be defeated because they control the ballot box, the government, the media, the courts ,the people and the GOP Rhino s and are the very kings of cheat. It is a race of cheats and the GOP is not in the same league. Maybe in 5 generations but I doubt it they also control the youth. Thank you voters. How blind can one be? How long was ole RIP VAN asleep?

PEOPLE INVOLVED IN VOTE FRAUD NEED TO BE DENIED THEIR STATUS AS CITIZENS, as they do not respect their fellow country men & women.

general Miley needs to be court Marshaled and then made to stand before a Military Tribunal where , after conviction be hanged for treason within 72 Hours.

Use rope to hang traitors with little lead tags AND THEN AUCTION OFF THE ROPES.

If this is true Milley should be indicted and should be court-martialed for treason, insubordination and usurping the power of the Commander in Chief

Then hanged by the neck until dead—and buried in a mass grave with all fellow conspirators.

WHY HAS HE NOT BROUGHT BEFORE A FIREING SQUAD ?

I dont know how President Trump got different references for people of loyalty and trustworthiness and selected them for different positions or promotions. The people who promoted this no good to President Trump are just as guilty as Milley is.Purposeful? Traitors all.

In other countries Milley would be executed for this. Chinese must really look at America how in chaos and dishonest we really are

THIS NEWS ABOUT GENERAL MILLEY IS VICOUS TRAITORUS ACT AS DESCRIBED IN THE MILITARY CODE OF JUSTICE! THIS CALLS FOR AN COURTS MARSHAL IMMDEIATELY! MILLEY IS NOW OUR ” BENEDICT ARNOLD LIKE THE ONE IN 1776 THAT GAVE THE BRITISH THE PLANS FOR ” FORT WEST POINT” IN THE REVOLUTIONARY WAR THEN ESCAPED TO ENGLAND! 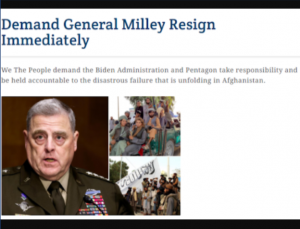 The CCP dangles carrots in front of people in any Official capacity. Politicians, Movie stars, Governors, Legislaters, Teachers, even Ive heard in teh Church? Prayer is needed and God taught once again in Schools. It starts in the formative years of a Childs education. Teach them Gods 10 Commandments and this will see them through life

If this is true,Milley should be put in front of a firing squad for treason!!

This is the very stuff that the Second Amendment was put in the constitution for!

Both in that picture with Trump were treasonous back stabbing soldout globalists. Trump was surrounded by traitors and so are the American people. We don’t just have a shadow govt we have a shadow society. Marxism trains their people to implement a double standard too. They also teach only their voices are to be heard and not the voices of their oppressors (us). They have a whole woke army being paid for by the tax payer money they continually steal. Only Almighty God can fix this globalist trap.

Milley may be a traitor, but no American over 30 can believe he acted without guidance from the Deep State! Adam Shift too, should be the gallows next to him as he knowingly acted illegally on “intentionally created lies” to undermine America’s leader! How much longer on American Patriots going to keep their safety’s on ??

Whoa there partner — Let’s not condemn a man on a SINGLE unsubstantiated story. This does CERTAINLY warrant an investigation. Unfortunately, with the democrat’s in control I, personally, DOUBT they will ever “approve” ANY investigation which places them in jeopardy. “If” these accusations are TRUE, the man is not simply ‘bad’, he is a TRAITOR and should be treated as such!!!

Looks like the current fraudulent administration is guilty of treason as well but who is going to hold them all accountable? Hmmmm?

we should . let’s sue them for total ignorance and harming America.

This tratior should be arrested and if convicted taken out and shot. He is a discrace to his uniform to his service and to this great country.

There should be a public ceremony, in which all the buttons and rank symbols on Gen. Milley’s uniform should be cut off, then he should spend the next 20 years in Leavenworth Federal military prison. That is, if the statements above are true. He has violated his oath as an officer of the United States military, and deserves public humiliation and imprisonment.

[…] Find More to that Topic: thehollywoodconservative.us/articles/milley-contacted-communist-chinese-to-confirm-he-would-sabotage-president-trumps-orders-if-war-broke-out/ […]