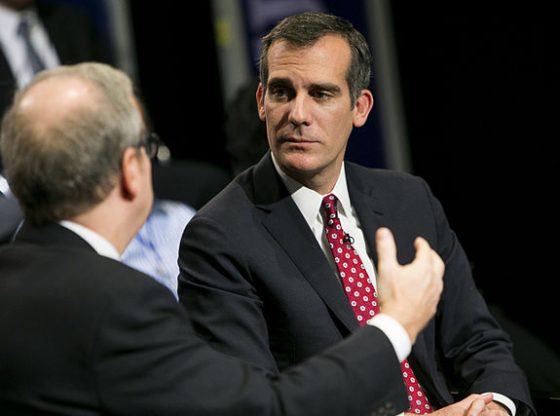 Mayor Garcetti talking at the National Journal Next America event about immigration in America. Via Wikimedia Commons.
News |

Los Angeles Mayor Eric Garcetti is trying to peddle the most air-headed excuse for breaking his own Covid-19 rules yet. While it’s been a common theme to see California Democrats flouting their own rules, Garcetti’s response takes the cake.

The Los Angeles mayor was photographed without a mask at the NFC Championship with NBA legend Magic Johnson and San Francisco Mayor London Breed. After being called out for flouting the indoor mask mandate, Garcetti tried to claim he held his breath for the photos.

“I’ll take personal responsibility,” he said, before telling reporters that “if it makes you and everyone else happy — or even the photographs with people where literally I’m holding my breath for two seconds — I won’t even do that.”

California implemented a universal indoor mask mandate in December that was extended to run through Feb. 15. SoFi Stadium, located in Inglewood, also has a mask policy requiring all fans to mask up unless they are eating or drinking.

Is the dumbest excuse pushed by a Democrat yet?