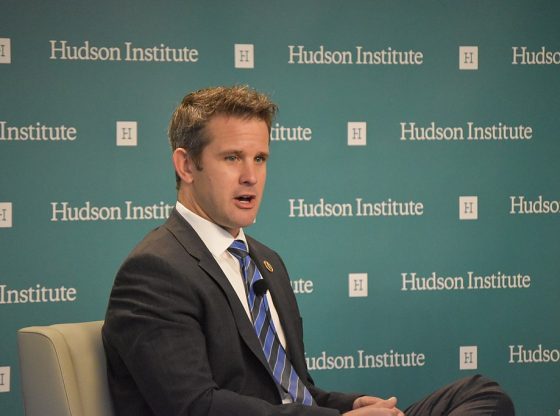 Could Adam Kinzinger already be planning his re-entry to politics?

The anti-Trump Republican Congressman says he isn’t ruling out making a run for Senate, Governor of Illinois, or even the White House.

Rep. Kinzinger recently announced he wouldn’t be running for re-election next year.

The retiring Illinois congressman told CNN that he is considering launching a campaign for either the Senate or the Illinois governor’s mansion. He said he will “probably” make a decision by January.

He also told the network that he “definitely” isn’t ruling out a bid for president in 2024.

If he ultimately mounts a bid for statewide office in Illinois, Kinzinger will face an uphill battle. For one, he would still likely face a tough primary campaign, putting his fate in the hands of Republican voters who are still largely aligned with Trump.

A 2024 presidential bid wouldn’t likely be any easier for Kinzinger. Trump himself has floated another run for the White House, while other would-be candidates, like Florida Gov. Ron DeSantis (R), have closely aligned themselves with the former president and are highly popular among Trump’s voter base.

Kinzinger who has been a longtime critic of former President Trump was also one of the House Republicans who voted to impeach him following the Capitol riot last January. Since then, Kinzinger was named to Speaker Pelosi’s committee to investigate the event of the riot.

The chances of this man going anywhere further in politics are between few and none.

Adam Kissmyassinger is hated by Illinois Republicans and Dumocraps are still going to vote for Duckworthless.
He needs to relocate to Venezuela where he can run for the “Presidency”.

I saw this coming. And his Illinois location could get him elected because he is really in the Demo camp. But maybe better than a progressive senator. Don’t think he will get anywhere with a presidential run?

Listen a. assinger, were kicking u to the curb, along with other rhinos. U can’t be stupid enough, to think u can run as a repuke, being the traitor u are. We will make sure u don’t run on that ticket, but switching sides, I’m sure u might be accepted by lefty loonies, they like your kind,good luck with that.

Kinzinger. What a cry baby! Quite sure that if we had to rely on him for anything at all, just forget it! As for a real job, don’t count on it. Who would hire him? Unless he decides to work as a professional backstabber.

Next time run as what you are a Communist demoshit

Retiring my acking back. He had not the slightest chance of either being nominated and even less of a chance of winning in the general. He’s merely taking advantage of rather liberal retirement use of unspent campaign funds. Anywhere else it would be illegal.

YOU’VE BEEN ON THE GOVT TIT LONG ENOUGH!

Good Luck, Mr RINO! Maybe you should switch Parties first?? Hope you go down in flames!!

HAHAHAHAHAHAHAHA! I heard there is a better, more suitable job available for you–there’s an opening for a person to pick up dog shit in the parks in you community!

[…] Info on that Topic: thehollywoodconservative.us/articles/kinzinger-considering-run-for-senate-white-house/ […]

[…] Find More on on that Topic: thehollywoodconservative.us/articles/kinzinger-considering-run-for-senate-white-house/ […]

[…] Read More on to that Topic: thehollywoodconservative.us/articles/kinzinger-considering-run-for-senate-white-house/ […]