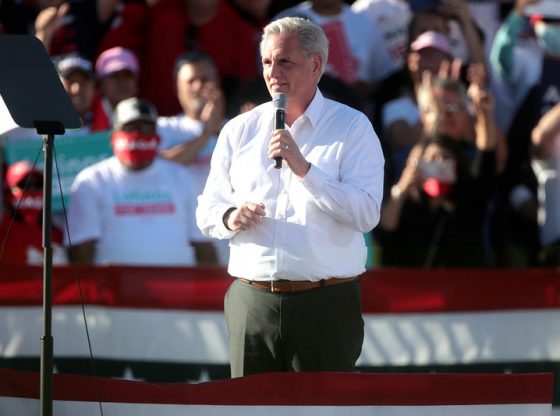 House Minority Leader Kevin McCarthy is coming to the defense of Florida Rep. Matt Gaetz saying that the embattled Republican won’t be stripped of committee assignments because he is “innocent until proven guilty.” The Republican leader confirmed the party will not seek to punish Gaetz unless there are legitimate charges filed against the Congressman.

“Matt Gaetz is the same as any American, he’s innocent until proven guilty,” McCarthy said regarding the allegations made against the 38 year-old congressman. “There’s no charges against him yet. If a charge comes forward, that will be dealt with at that time.”

McCarthy confirmed that he has spoken with Representative Gaetz, who has told the minority leader that he is innocent. McCarthy also said that he explained the rules of the conference to Gaetz and that they would take action if something were to come out.

The Associated Press reported that McCarthy was asked whether or not Republicans would take action against Gaetz if more details are revealed before charges are made. McCarthy answered, “That’s a hypothetical question. I’ll deal with whatever issue as it comes. As of right now, Matt Gaetz says he is innocent, there’s an investigation going on, and I’ll let the investigation take care of itself.”

Charges have yet to be filed against Gaetz and he has publicly stated that he is innocent. At a speech on April 9th in Miami, the congressman said, “I have not yet begun to fight … I’m built for the battle and I’m not going anywhere … The smears against me range from distortions of my personal life to wild — and I mean wild — conspiracy theories.”

Gaetz is currently under federal investigation for sexual misconduct.

[…] Here you can find 96036 additional Information on that Topic: thehollywoodconservative.us/articles/kevin-mccarthy-breaks-silence-on-rep-gaetz-scandal/ […]

[…] Read More on on that Topic: thehollywoodconservative.us/articles/kevin-mccarthy-breaks-silence-on-rep-gaetz-scandal/ […]

hop over to this web-site

[…] Read More on that Topic: thehollywoodconservative.us/articles/kevin-mccarthy-breaks-silence-on-rep-gaetz-scandal/ […]