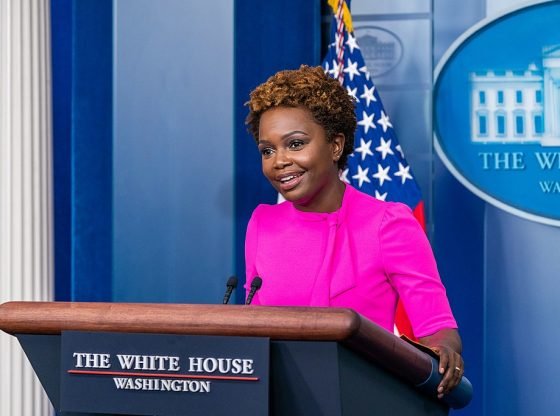 “I am proud to announce that Karine Jean-Pierre will serve as the next White House Press Secretary,” the president said Thursday. “Karine not only brings the experience, talent and integrity needed for this difficult job, but she will continue to lead the way in communicating about the work of the Biden-Harris Administration on behalf of the American people.”

Biden added: “Jill and I have known and respected Karine a long time and she will be a strong voice speaking for me and this Administration.”

Jen Psaki is set to leave her role on May 13th. It’s not clear when she will resume her new role with MSNBC.

More LA Riots!
Ex-Reporter Questions Whether Assassination Would ‘Save’ Roe V. Wade and Immediately Regrets It

Don’t be so hard on her, she was a loyal puppet(Democrat).

This should be interesting, let’s see if she can lie unsuccessfully as the last one. Hell. she might even answer a question. Hope we pay here well. Now the other one can fade away like Biden will, just a very bad dream.

I’ve seen this gal before when she filled in for Jen. She seemed to be a very nice young lady. My fear is that once she’s under the thumb of the corrupt administration now in the White House, she will come across as being like Jen….I’m curious to how soon she bows down to their corruption and lies. Time will tell…

Hopefully this new one won’t be as aggravating as Peppermint Patty. I could not even listen to that motormouth without feeling like throwing up!

She seemed to me to be a demon possessed psychopath serial liar version of Peppermint Patty . She is perfect and already fully trained for her new job with CNN. The people running our federal government are all insane.

It will take someone like her to defend the Biden administration from the joke of ticket they have. Joe Biden is a failure at leadership for the past fifty years and Kamala is incoherent and the greatest flop of a vice president since the Executive office was created

Typical. Just bloody typical. At least she is no obscenely tattooed transgender freak. Or IS she?