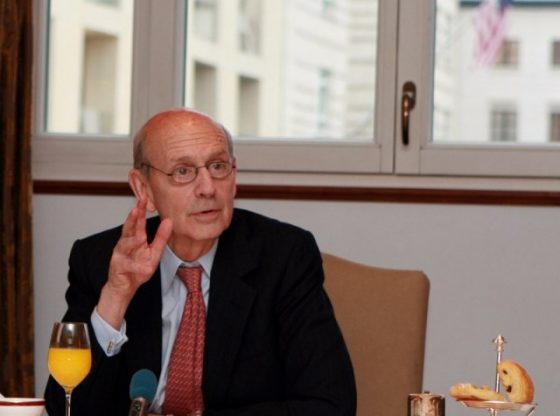 Liberal Justice Stephen Breyer is warning against packing the Supreme Court and reminding progressives that if they move forward the move will have consequences.

According to reports from Newsmax:

“What goes around comes around. And if the Democrats can do it, the Republicans can do it,” Breyer told NPR in an interview published Friday.

Biden has formed a commission to study potential changes to the court.

Democrats again called to pack the Supreme Court with four more members after the justices declined to block a Texas law that makes abortions illegal six weeks after pregnancy.

Breyer, however, said an important part of our democracy has been public acceptance of court opinions that prevail even when many people have disagreed with the decision.

Justice Breyer’s comments come as Democrats push him to retire. The senior justice has indicated that he will step down eventually but wants to be sure the move won’t undo his work from the last 25 years.

Amanda Remembers 9/11 – Where Were You?
White House Staffers Routinely Skip Biden Press Conferences Over Fear of What He’ll Say Next

As stated, Scripture warns that he who digs a pit to harm others may himself fall into it.

Liberals ignore history. They don’t believe in cause and effect either. The only thing they know about science is how to spell it.

I’m not so sure they really even could do that without spellcheck.

They’ve proven they do not care about the U. S. Constitution, Rulings from the U. S. Supreme court, or the Rule of Law (in general).

Dems (Libbies & Progs) .. are in total disregard for the Constitution. They are attempting to make a reality out of words spoken by former USSC justice Ruth Bader Ginsberg. In so many words, RBG said “The American constitution as we know it is obsolete.” “The United States constitution should evolve into a ‘Living’ constitution.” (Both quotations might not be exactly as RBG spoke them.. but they are fairly close.)

Justice Ginsberg clarified her statements by indicating that our society and demographics have evolved very far beyond the intent of what our founding fathers meant when they constructed our nation’s Declaration of Independence, The Bill of Rights and The Constitution. She even went so far as to intimate that America should more closely resemble the governing structure to that of Venezuela.

I know some people who just risked their lives getting out of Venezuela. They had to abandon their businesses and their life savings in order to do it, and made their getaway in a rickety boat through a hail of gunfire from government troops.
Is this what Ginsberg meant we should have?

I sincerely doubt that!

What goes around, comes around!

We are now living Revelation! Be warned!

Pre–Revelation actually. First rapture ; then Ratification of peace treaty with Israel then the tribulation which is revelation begins. We are most likely Ezekiel 38 and 39 time periods. This is especially true since Afghanistan he’s now terroristic threat.

Time for another great flood.

The rainbow was a promise to never flood the earth again, however, the next time will be by fire.
2 Peter 3:10

“But the day of the Lord will come as a thief in the night; in the which the heavens shall pass away with a great noise, and the elements shall melt with fervent heat, the earth also and the works that are therein shall be burned up.”

There will never be another great flood, God promised that. It will be fire this time, read revelations.

Marlene: You beat me to it. The next destruction of the Earth will be by fire from the sky. Just as a coincidence NASA is predicting a ‘near-miss’ by a massive asteroid several miles in diameter in 2032 that could end all life on Earth for millions of years. All it would take to hit Earth is a very small deflection of its orbit. Well within God’s capabilities. It won’t matter if the liberals do not believe in God. We have no capability to deflect or destroy an asteroid of that size.

Stop what ever you’re doing and concentrate all your effort on impeaching/jailing this buffoon that we have as a president or we will have no country at all. He killed 13 soldiers and left billions of military equipment in Afghanistan with his mindless withdrawal of troops. This should be enough evidence you need. Tell your reps to sponsor or co-sponsor a bill to Impeach. This vaccination mandate is a diversion to the real issue.

Hollywood Conservative blog board administrator. RELEASE MY POST NOW!
There is nothing matching any criteria for being objectionable. There are no personal attacks on anyone. There is no misinformation cited in the post.

Should we assume by the mere name of your webpage, the “Hollywood” piece tells us your algorithm filters are set to flag and discard any posting that is perceived to disparage the liberal or progressive position?

On the surface this is a simple math exercise. But in reality, it exposes how the left, once it achieves their main goal of a one party or “Uniparty” form of government, The USSC will no longer reside in the Judicial branch of our government. It will become another weaponized tool of the Executive branch.

No need to worry about what party is in power at any given point on the political timeline. Once the liberal left achieves complete and total control as a “Uniparty” government, our court system at every level will be forever co-opted and corrupt. It will only be a matter of time until they achieve their ultimate goal as outlined (or proposed) by Ruth Bader Ginsberg to re-write and construct our constitution into a “Living” or “Flexible” Constitution.

When this happens, then the goal of becoming a socialist nation will have been achieved. The next step after that will be a Totalitarian Communist country. All Americans better wake up and engage. Communism does not pick sides like in a playground pick-up game of tag or whatever. Communism, once achieved and implemented will touch every American life.

Then there’s the judge not and reaping what you sow!

[…] Find More to that Topic: thehollywoodconservative.us/articles/justice-breyer-warns-about-repercussions-of-court-packing/ […]

[…] Info to that Topic: thehollywoodconservative.us/articles/justice-breyer-warns-about-repercussions-of-court-packing/ […]