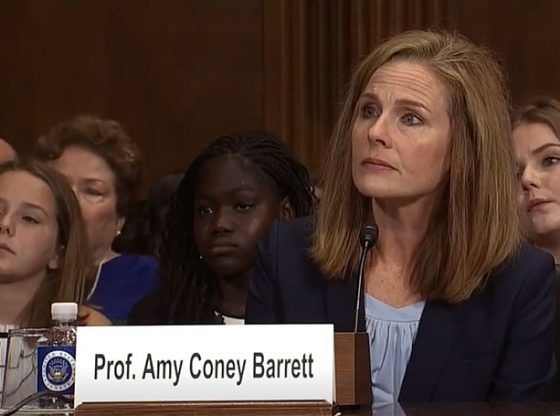 Barrett denied a petition to stop the construction of the Obama Foundation library in Chicago.

“We greatly appreciate the continued support of our project and process by the courts, including now from the highest court in the land,” an Obama Foundation spokesperson told Fox News on Friday. “With their support, and the outpouring of support we’ve received from so many on the South Side and across the city of Chicago, we were so pleased to be able to kick off our construction this past week and get us one day closer to doors opening at the Obama Presidential Center.”

The advocacy group Protect Our Parks and other plaintiffs had tried to halt the construction of the Obama presidential library in Chicago’s Jackson Park this week, citing it would be harmful to the local environment.

“Today’s Supreme Court decision is disappointing, but not surprising. We still believe that preserving the status quo is fundamental to preventing irreparable harm in Jackson Park,” the petitioners’ co-counsel Michael Rachlis said in a statement, the Hill reported Friday.

“Nonetheless, our core arguments seek to protect the long-term environmental and historical resources in Jackson Park, and we look forward to presenting our evidence and these arguments in the appellate and district court in the coming weeks.”

Barrett is tasked with handling emergency matters from the state of Illinois. Barrett was also recently tasked with hearing a petition from Indiana where Indiana University student challenged a vaccine mandate by the University of Indiana. [READ NEXT: Barrett Sides With Government Over Students]

Will the library include Barry’s D.N.A. so We can find his real father? This is a serious inquiry .

I’m sure he had it at one time, but now he can’t find it. Oh well, most of us already know that Frank Marshall Davis is his biological father.

Mean its not obama?

And we all want to know the truth!!!

Also will it have Michael as the 1st transgender .1st MAN..OR LADY???

globalist puppet, libby snow flake sheep collecting welfare all their life can’t read and they need a globalist puppet, barry soetoro and his husband big MIKE ebook library so the ebooks can read to them . . . . .

She is a traitor and mst go.

A traitor why? Because she didn’t grant an injunction. You should be damn glad she’s on the court. It’s people like you that is going to hand this country over to the left and kill the United States of America. I’m glad there’s not more like you. We need real conservatives to fight the real battle and not say stupid stuff like this over a non-issue. If she rules abortion is a right, then talk to me, otherwise, keep your comments to yourself.

I knew there was a reason I reserved judgment on her. Now I’ve been vindicated, and she’s just another coward.

Amy Coney Barrett is a fraud. She’s a Joe Biden nancy Pelosi Catholic. She should have been blonde. Two fathers adopted children of color and walked them in a park today. Amy Comey Barrett has nothing over these two guys that are fathers by adoption. I bet they can apply the law more equal to reasonable people.

Richard
Reply to  A S K

It’s not a matter of taking sides. It is a matter of applying the Law to the case before her. Those who filed the suit just didn’t have all of their ducks in a row to prove their case.. It is a simple as that. The case was decided on facts, not feelings…..

She stood by the law. Just what she is supposed to do! No I hate obummer but law is law….

I am so disappointed to learn that Amy Coney Barrett is actually meeting Trump’s description of her as a thoughtful justice who would fairly apply the law to all. I mean I know that’s what he said, but everybody just assumed what he meant was that she was a right wing loon who unthinkingly implemented the MAGA agenda and to heck with the law. Now I feel like I’ve been robbed …

A park to be destroyed for the paean temple of the vainglorious, self-centered, divisive, Mr. “Me” “My” “Mine” & “Myself”!

By a LGBTQ CALLED OBAMA

Was all the effort to get her seated at Supreme Court worth while ? I certainly have my doubts. I think it was a mistake. The nominees of the left never disappoint, ours almost always.

No what disservice she has committed against her own children

Barrett didn’t side with anyone. Where Obama’s library is located is no business of the Supreme Court and the Federal government shouldn’t decide where it should be located. I believe it isn’t a Federal project. Let the people of Illinois decide.

And let the people of Illinois pay for the library, not the rest of us Americans. I dont want to finance Ovomit’s library.

Amy is a disgusting fraud and a Judas!!
She is a sick broad!!!

Why does she look related to John Roberts?

Sometimes President Trump appoints people who are corrupted to expose them? Im not sure what game she is playing but possibly being threatened? Blackmailed? Her husband is also a Lawyer so who knows what side they are on?

One more traitor to America

Just anther Rhino. Running to the bank with the bribes.

Glad she is not my mother

I am not now and never will be an Obama fan! There are too many issues of his that leave me cold and as a result, I rarely trust anything that he says! One situation that especially troubles me is his obvious dislike of the Jewish people and he has made these feelings clear many times!
Given his distaste for the Jewish people, I must admit that I was very disappointed that Justice Amy Coney Barrett would side with Obama as I thought that she would also be disappointed by his Jew hatred and would feel that such a person doesn’t deserve to be given the Obama Presidential Center!

I have to ask you being Jewish. Palm Beach and Miami continues to vote for the democrats in the district while these people are totally against the Jewish Nation with Obama and Biden. Are they so damn dumb or did they get reeducation by the democrats while Obama was in office? The first time they voted that may be ignorance, the second time is stupidity but three times and more, that is the sign of a dumb arsenal.

globalists and globalist puppet $oro$ are zionists and their jewish sheep vote for the demonrat criminal party even though zionist globalists created and funded the holocaust . Stupid sheep say baa baa baa .

No Soros is not a genuine Jew. Neither are Feinstein, Weinstein, Jeff Zucker or Mark Zuckerberg and many others. The Khazerian Mafia infiltrated The Jewish faith years ago. Mossad is like Americas CIA all corrupt. Like the evil ones infiltrated the Catholic Church and the Moslem faith, only a small percentage of Jewish people are from the original Hebrews. Satan is a liar and a deceiver

I agree with the statements made here about Mrs. COWARD BARRETT. She’s a backstabber.

and the blood of Judas Iscariot runs right through that thing she calls her ‘heart.’

The Muslim son of a bitch should be in prison, not opening a propaganda center

Exactly, but instead he’s the puppet master …everything biden has done is everything osama obama would do!!! The demon is a Sleeper Cell!!!!! He needs to piss of the Clinton’s, but I think even they are scared of him!!!

How did Amy miss these simple truth

The Supreme Court is responsible not only for this approval, but the deaths and blood in Afghanistan. They refused to just listen to President Trump’s legal about the fraudulent votes on November 3, 2020. They sided with the DC swamp instead of living up to the oath of office. Biden is so demented he has no idea what he is doing, but the Supreme Court failed to even listen therefore the blood and lives are on their hands. America has become so corrupt, because these people are joining in the corruption.

I agree she is a coward , you can’t pick a Supreme Court Justice with children because if they disagree with something they are afraid their children would be attacked by the idiots that want everyone to believe what they believe.

I say the criticisms are premature. There is no outline of the legal arguments here. It is not the place of any judge to “take sides” on anything (although they often do). These are preliminary legal procedural rulings and should be understood as such. (That being said, the vaccine ruling was rather disappointing; in my legally uneducated mind, it would seem that a stay on the vaccine mandate until it could be adjudicated would be more in line with constitutional liberty.)

She is not what everyone thought she would be or do! Obama is long gone, so hopefully this is more of the Pantomime? Obamas actual blood father was Frank Marshall Davis another Communist who hated America

The bastard isn’t gone—Obummer has been pulling TRAITOR Joe’s strings. He wanted a third term.

Why isn’t it in Kenya?

The roll of the SCOTUS is to rule on whether it follows the constitution not to settle civil matters. Going to hell in a hand basket.

A presidential library for an illegal alien who was never eligible to be president, his own Grandmother said she held him at his birth in Kenya. And old hag Pilousy says he vetted. All liars seem to stick together like criminals stick together!

devops as a service model