John Kennedy Stumps Biden Treasury Secretary With one Simple Question, Then Floors her With her own Words 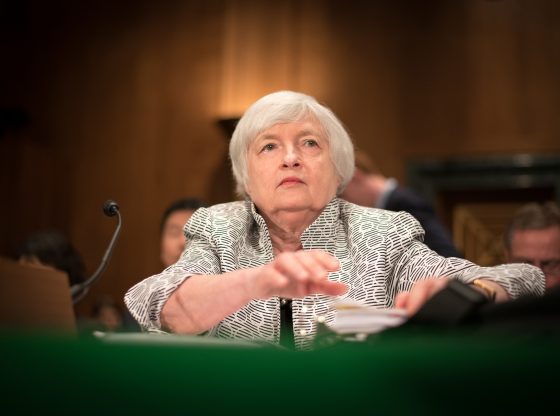 One of the most quotable members of the U.S. Senate struck again, as Louisiana Republican John Kennedy stumped Biden Treasury Secretary Janet Yellen with a simple question about debt, then answered it for her – using her own past words.

During a Senate Banking Committee hearing on the Biden’s administration’s “Build Back Better” multi-trillion dollar spending scheme, which economists predict will require as much as $4.6 trillion in debt or new taxes, Kennedy asked Yellen to answer one question:

How much debt is too much?

And it turns out Kennedy had an answer – by quoting what Yellen said when Trump was in office.

Kennedy: “I would be remiss if I didn’t point out that, in my opinion, there is no fair-minded person in the Milky Way who believes the infrastructure bill and the Build Back Better bill are not going to require the American people to incur substantial debt. And here’s my question, and I’m looking for a number: How much, in the Biden administration’s opinion, is too much debt? At what point, as you incur debt, will the Biden administration say, ‘Okay, that’s it. We can’t borrow any more, or it’s going to hurt the American people’?”

Yellen: “First of all, I want to say that I disagree with your assessment of Build Back Better. It is fully paid for or even more than fully paid for, and CBO just completed a comprehensive review of it, in which they found essentially the same thing. . . . we’re accustomed to looking at debt-to-GDP ratios. And using those kinds of metrics and looking around the world, many economists have found that debt-to-GDP ratios of 100 or more tend to be associated with significant problems.”

Kennedy: “I’m going to run out of time. Let me ask you this, Madam Chair, quickly. You gave a great speech back in September of 2019. . . . This is what you said—I’m going to quote. I thought this was such a wise statement. You said the former Fed Chair said she is not worried about the debt-to-gross-domestic-product ratio in the United States right now. But added, and I quote, ‘I’m worried about the trajectory of where it’s going. It’s not stable. We’re not living within our means right now. Debt is going to escalate, and that’s going to create problems down the road. . . .’ Now, that was when the debt was $17 trillion. It’s $29 trillion. You’re going to add trillions more through the Build Back Better. Why is that not true today?”

Yellen: “I want to repeat again, Build Back Better is fully paid for and will not add to the debt or to deficits. In fact, we plan to reduce it.”

Kennedy: “You and I just don’t agree on that.”

As it turns out, virtually no one agrees with Yellen.

“The Penn Wharton budget model estimates that the Build Back Better Act would increase government spending by $2.1 trillion and drive the U.S. deficit up by $274 billion,” Kennedy’s office notes. “The model also predicts that the bill’s spending spree would decrease the U.S. GDP in the long term and that the bill’s real cost would be closer to $4.6 trillion if its temporary programs become permanent.”

The Democrats aren’t trying to make anything better. They haven’t made anything better since they have been in office. They only care about the American people worse off than they have ever been. They are not for the American people and never have been. They only want to destroy our country and take away our amendments. I say to hell with them and their plans. They have done way too many corrupt things already.

Do not pass ” build back better ” bill it is false

Yeah it’s paid for in the form of higher taxes for every American.

That’s exactly what we believe! They are talking about extracting money from us and use it for everything else besides infrastructure and what they call infrastructure may not have anything to do with it (see payments to illegals, open borders etc). If we saw what all is in this bill it would make us angry!

How is Build Back Better fully paid for? Not one official has explained it to the financially challenged people! Is it because they don’t know what they are talking about?

This woman lives in a Demon-cratic alternate universe, this much is clear. She will pontificate and rubber-stamp any insane economic policy to the utter ruin of our Democratic Republic. And why? To keep her job and put her children and grandchildren into Hahvahd and to build her beach house mansion in Bermuda.

[…] There you can find 4000 more Information on that Topic: thehollywoodconservative.us/articles/john-kennedy-stumps-biden-treasury-secretary-with-one-simple-question-then-floors-her-with-her-own-words/ […]

[…] There you can find 9133 additional Information to that Topic: thehollywoodconservative.us/articles/john-kennedy-stumps-biden-treasury-secretary-with-one-simple-question-then-floors-her-with-her-own-words/ […]