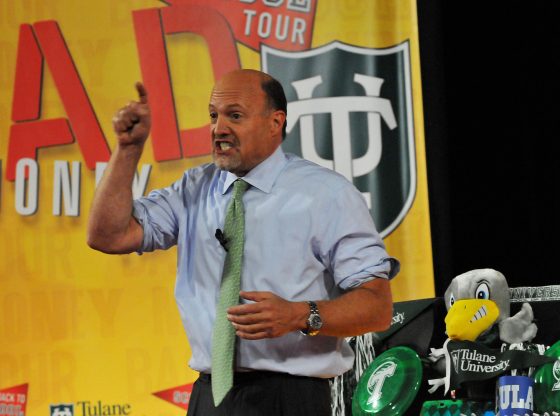 Popular CNBC anchor Jim Cramer shocked many observers after he announced that he believed that the US government has a ‘right’ to ‘force’ its citizens to ‘obey.’

CNBC anchor Jim Cramer was slammed for arguing that the government “has a right to force you to obey.”

The remarks from Cramer — who has worked as an anchor with the financial news outlet for the past two decades — follow his previous arguments in favor of harsh COVID-19 mitigation policies.

“I missed the ‘right to force you to obey’ in the Constitution but go off,” replied columnist Karol Markowicz.

Governments do not have rights. Only individuals have rights. Rights emerge from properties inherent to our existence, their source is our humanity, and they are fundamental to the nature of our being. Rights cannot be granted by government because they preexist all governments. https://t.co/YlaXGJrSf4

You came out as a fascist a while ago, but I guess this is a more blatant way of admitting it

Cramer went on to shoot back at some of his critics, claiming that, in another era, they would have been ‘pro-polio’:

I am getting people furious of my pro-vax stand. I don't have a pro-vax stand, i have a stand to keep people healthy. You are anti- healthy if you are against me. YOU WOULD HAVE BEEN PRO -POLIO

The government cannot force me to do/say a lot of things. I will not steal, murder, lie……….run traffic lights, that sort of thing. BUT the government can keep its nose out of my business. It has zero right to force my way of thinking, my values, my life style…………………….PERIOD.

That is as credible as the 18 yr old telling his girlfriend “its just the tip.”

Brain washed Marxists must believe Stalin was right to murder 66 Million politically incorrect and Hitler for his 6 Million Jews gassed to death?

Anyone dumb enough to follow a Socialist/Communist way of thinking need to move to China, RUSSIA, North Korea, or Cuba Leave America alone and leave America period! All communist countries have failed and failed their citizens in every way! The communist party is the party of failure just like the Biden Administration! Let’s Go Brandon!!!!!!!!!

Trebor, You ars so mistaken. I don’t know where or what Bernie Sanders blog you get your info from but to put you straight, the USA, according to the latest 2019 world freedom pole, is #15 in human freedom and #4 in economic freedom. Funny that Australia is at #5 overall in that pole. Just ask any Australian today if they think they’re at #5 in freedoms! No, western Europe is not full of socialist countries. They have socialist parties that have some government seats in parliaments, but they are not socialist governments. Spain, Germany and Italy were socialist/fascist governments at one time but how did that work out for them?? If you don’t think socialism and communism are not similar, try looking up “list of socialist countries worldwide” and you will discover Wikipedia that the definitions of communism and socialism are interconnected. You will also discover a very long list of countries and governments that have tried socialism and or communism and have failed and gone back to a different type of government. And no, the Nordic countries like Sweden are not really considered Socialist anymore as they have re-embraced a more capitalistic economy, even though the socialist party holds a slim majority in their parliament. The conservative party has almost as many seats. They have a social welfare program that is popular but then they also pay high taxes to pay for it and also pay co-pay for medical insurances. South Korea is NOT a socialist country. It is strickly a capitalist country that has flourished under capitalism as has any country that embraces it. South Korea does have a social welfare program that is popular but then so does the USA. There are socialist in South Korea but they are a small minority and they think North Korea is the Model for a “great society.” Really, North Korea! Why don’t you move to one of those socialist countries, Venezuela, Cuba, North Korea and live there for 5 years, then come back and tell us all how great it was? If you survive!

Oh the Communist party is great for the upper class well to do people with connections. For the average Joe not so much. Try visiting Russia and try to go where ever you want, Your prison cell awaits you even today in 2021. Cuba. Is the same and also North Korea. Just open your mouth and say what you think about little Kim or the country as a whole (hole) and see how long it takes you to get home.

Even Japan was Communist before WW2 they failed and went on the attack, now that they are not communist they are doing a lot better than when they were communist!

Bret
Once again you are listening to the wrong information, now Japan has a political are called the Communist party, but since its beginning it has had and still has an Imperialist. Japan was Imperialistic prior to WWII and is Imperialistic today.
You should learn that all the Countries you named are Autocratic, not Communist, in true Communism everyone shares equally in everything, do you see that happening in those Countries you call Communist.

Cramer is an idiot. He has been wrong on many things. Somebody please tell me why is this clown still on the air?

Did you show us how obeying the president was done when Trump was president ? I think not.

NO, IT IS IDIOTS LIKE CRAMER WHO NEED TO BE TOLD WHAT TO DO BY THE GOVERNMENT.
WHAT A DUNCE !

Government only has the right to force me to obey its requirements that are consistent with its authority. Under our Federal and State constitutions, governments don’t have unlimited authority.

They do not own you. They cannot direct you to put ANYTHING in your body against your will.

Cramer is just a economist, I am not worried about him. I am worried about the fact that Cramer is just echoing the words he heard from people in actual positions of power. So if anyone has ever wondered whether it’s time to get your hands on some firepower and stopping power to back up your will even if it’s illegal consider this a late warning because Cramer would not be echoing words unless plans are already going into effect and actions may start happening over the Holidays while everyone is paying attention to something else. Like that bombing that happened about this time last year that had false flag all over it and the person who is supposed to be responsible for it just happened to blow himself up so no one could question him. Or what happened to Nick Sandman and the Covington Catholic Kids or Kyle Rittenhouse .

He’s a crappy economist if he is indeed one. He’s definitely one of the dumbest on TV. He’s now de-elevated himself to propagandist. He’s nothing more than entertainment for nincompoops just like him.

Cramer clearly doesn’t have a clue what country he’s living in. He like so many others who hate America continue to underestimate the American people and how much we will tolerate. Since he’s condoning government control over all the American people then he’s clearly giving the American people carte blanche to tell him how he should live and demand that he do so. It’s obvious that Cramer is anti-American and is totally supporting the socialist/communist let’s destroy America and the rights of the American people Democrats. One wonders why people like Cramer since they hate America as much as they do why are they still living here? No one is forcing them to live in the US and people like Cramer can well afford to move to another country that suits their socialist/communist beliefs. The sooner Cramer moves to another country the happier he will be and God knows so will the rest of us. Good riddance!

Cramer works for CNBC because he’s too dumb to work at a decent job. He runs on emotion, not smarts.

If so he’s got the dumbest emotions too.

Cramer is an idiot.

Please go easy on Cramer. After all what would one expect of him after the Seinfeld Show ended.

That is exactly why we have Government from the cities top the national Governments. Exactly why they are Governments. Did everyone forget about all the laws we have to obey or be punished for in some way for jay walking to murder. The jails, prisons and bank account for the city or state is full because of those who thought they did not have to obey the laws of the Government who controls them.
Every mandate put in place by the Governments has been upheld by the SCOTUS in thew past 200 years.

SCOTUS already reversed many of Biden’s mandates.. including Vax mandates for non-government employees. You should pay more attention to someone smarter than Cramer, that would be about anyone NOT in this clown car admin.

That is exactly what we’ve seen and read. Why are so many fully vaccinated people in CA coming down with another version of Covid now? Explain that, Jimbob?

Jim Cramer’s brain is completely twisted up now. Don’t know if the money on his brain has done that to him? As a Conservative, I’m pro vax but also believe in individual rights to do with their own bodies as they see fit without Government Mandates and Edicts! Is this still America??

That’s all well and good but there is Zero reasons to be “Pro Vax”. It is INEFFECTIVE for it’s stated purpose yet they are willinhg to wreck the ecomomy and society to force it on everyone, even those who don’t need it at all, 18and younger, and to those who have vastly superior natural immunity from previous infection. There is an alternate agenda because the damn vax doesn’t work, at least for it’s stated purpose.
What ever the vax really does is unknown to me but it for damn sure it wouldn’t stand the light of day or we WOULD know.

This guy has never been anything but a doltish crank. AND BTW Cramer, the SCOTUS already said no, the federal government does not have a RIGHT or authority to do anything of the sort.

The present government are masters at mind control. Be very careful. This guy must have been brought up in North Korea.

Didn’t Cramer use to be a journalist? Now he’s 100% bought into the Biden’s administration request favorable treatment by their press. Yeah, like they’ve been brutal, right?