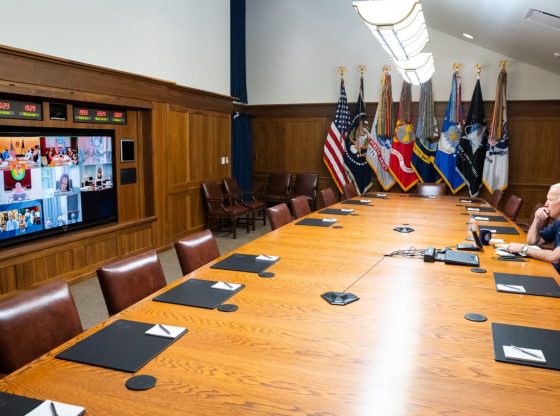 President Trump promised to destroy ISIS and he effectively did, ahead of schedule. But it appears that the terror group has seen a rebirth under Biden and is surging in Afghanistan.

According to The Wall Street Journal:

WASHINGTON—The U.S. warned that Islamic State poses a threat to Americans in Afghanistan as the Biden administration seeks to evacuate thousands of U.S. citizens and Afghan allies.

“The threat is real. It is acute. It is persistent. And it is something we are focused on with every tool in our arsenal,” Jake Sullivan, President Biden’s national security adviser, told CNN on Sunday when asked whether  are vulnerable to terrorist attacks.

President Biden, speaking from the White House, said: “We know that terrorists may seek to exploit the situation and target innocent Afghans or American troops. We’re maintaining constant vigilance to monitor and disrupt threats from any source.”

Islamic State is among several terrorist groups present in Afghanistan,  with the Taliban. The Taliban had harbored al Qaeda before that group’s terrorist attacks on the U.S. in 2001, and reports have surfaced that the Taliban have freed al Qaeda fighters from prisons as they gained control of the country this month.

The Biden administration continues to try and get allies and Americans out of Afghanistan going to the lengths of forcing commercial airlines to help and getting 12 countries on board to take refugees.

Didn’t Hussein O’[email protected]#@ call them “the JV” team…👀like these loser-libturds will always be “the perennial JV” team…amateurish & inept, can’t win at anything❗️

Biden the idiot displaying how stupid he is

LISTEN UP….GOD is Against the TERRORISTS. THERE is a REAS ON GOD Chose JACOB Over ESAU. GOD is STILL Separating the GOOD APPLES from the BAD ONES. HE will keep the GOOD ONES and Get RID of the BAD ONES. From SamuraiQueen. 😄😄😄

Biden likes terrorist groups. His son has business deals with them. Nice folks, those loser Bidens.

Wee doggie Ellie May, if that don’t tell you the same people from obama’s era are still calling the shots.

As a result of the AFGHANISTAN DEBACLE DEMENTIA JOE BIDEN SHOULD RESIGN IMMEDIATELY AND TAKE KAMALA AND PELOSI,SCHUMER,SCHIFF WITH HIM !

The Administration ..Mr. President Joe Biden & Vice President Mrs. Kamala Harris…. about FRAUD!
again.. and again.. ” In the the face one succumbs to Cowardice is to known as a COWARD”..! Tks Coop..Charlie G/Sr……….THE USA!

WHY NOT, after all BOZO THE KENYAN ILLEGAL STARTED THEM TO BRGIN WITH IN HIS 8 YEARS AS THE ILLEGAL PRESIDENT!

Yes that is the favorite terrorist organization that the obammie and biteme regime produced that was played down as junior varsity!
The communist democrat cult members have been controlling this dementia jo and the ho regime and are bringing our country down!

It’s time for President Trump to come back through the front door of the White House while Joe leaves through the back door.

ISIS the ‘JV Team’ are like cockroaches, fleeing the light to hide in caves until the exterminators are gone, to emerge in greater strength and in greater numbers. Of course Joe Blow’s decisions were tragically ill-advised errors of military judgment. Yet let us not forget the incompetent, cowardly nincompoop(s?) leading Afghanistan’s ‘Government’ who fled like rats deserting a sinking ship. These play a significant role in the human catastrophe.

THanks Biden for the ISIS & Taliban duo

Thank obama and biden himself for letting the goat herders out of Guantanamo. Now biden knelt down with the WNBA at OUR White House. Impeach now and try him for treason.