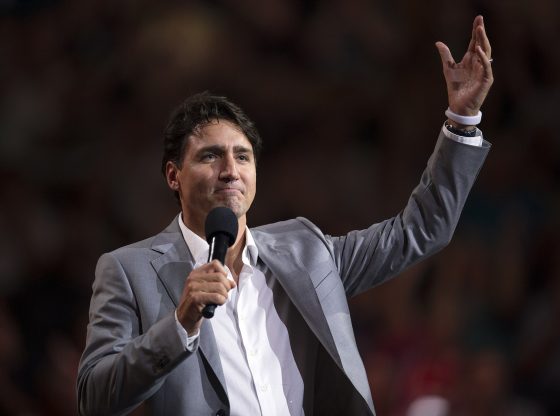 Via Paul Crespo for AAN:

ANALYSIS – In a move that should have anti-Trump Canadians in an uproar, Prime Minister Justin Trudeau said Thursday that sending in the army to end the mostly peaceful, anti-vaccine mandate and anti-government protest in the capital of Ottawa might be an option. However, he noted that it was ‘not in the cards right now.”

The left-wing Canadian leader made his statements while remaining hidden with his family in an ‘undisclosed location’ for COVID isolation, after one of his children tested positive.

Initially begun as a trucker protest against a requirement from the U.S. and Canada that cross-border truckers be fully vaccinated has expanded into a demonstration against what the protesters see as draconian public health measures more broadly, as well as against Trudeau.

The Prime Minister earlier made dismissive remarks about the truckers and their supporters, saying: “The small fringe minority of people who are on their way to Ottawa, who are holding unacceptable views that they are expressing, do not represent the views of Canadians…”

The New York Post noted that: “A GoFundMe for this “small fringe minority” raised nearly $9 million in just two weeks.”

The Washington Post’s attempt at making the protest sound worse than they are seemed to fall flat: “The blockades have caused traffic chaos. Drivers have blared their horns at all hours. Police say city residents have been the victims of threatening behavior and hateful vitriol.”

Ottawa police have arrested three people in connection with the protests, including one man who brought a weapon to a public meeting. Police are investigating dozens of potential crimes after demonstrators desecrated monuments and harassed workers at a soup kitchen for the homeless.

This is a far cry from the burning, looting, and violence from massive BLM riots across the U.S. in the summer 2020 which injured 2,000 police and caused $3 billion in damages.

While the number of demonstrators in the city totals roughly 250 people — down considerably from the thousands who gathered over the weekend — hundreds of vehicles, including big rigs, are still blocking critical arteries in the downtown core.

The possibility of using military force domestically to quell protests was first broached by Ottawa Police Chief Peter Sloly, when he said Wednesday that “there may not be a policing solution to this demonstration” and that he and other commanders were “looking at every single option, including military aid to civil power” to end it.

Deploying the military to support domestic law enforcement is rare in Canada and Sloly admitted it carries risks.

Still, Sloly was severely criticized for his comments.

Rather than rebuff Sloly’s comments, Trudeau’s remarks only left open the possibility of using the Canadian Army against Canadian civilians as a looming threat – all over ‘blaring horns, vitriol and roadblocks.’

CNN in Discussion to Pay Chris Cuomo $9M in Hush Money to Protect Zucker
Pelosi Instructs U.S. Athletes to not Speak Out Against Chinese Communist Crimes Against Humanity