Climate activist Isra Hirsi, the 18-year-old daughter of Rep. Ilhan Omar, D-Minn., added the communist hammer and sickle to her Twitter bio and has openly called for a communist revolution online.

Hirsi, who co-founded the U.S. Youth Climate Strike and has received fawning coverage from liberal media outlets, added the infamous symbol to her profile at some point in the last three weeks, internet archives show.

In addition to this, a year ago she openly called for a communist “revolution” online and is reportedly in charge of writing some of her mother’s tweets.

Rep. Ilhan Omar’s daughter added a communist symbol to her bio. Isra Hirsi has talked before about how she writes some of her mother’s tweets. During the BLM race riots in her city, Isra put out a call for donations for rioters. She has also called for a communist insurrection. pic.twitter.com/gAViZZctPp

Hirsi will be attending Columbia University in New York City this fall.

Considering that Communist regimes were responsible for the deaths of hundreds of millions of people throughout the 20th century, the message Hirsi is now sending could very well be perceived as a threat. 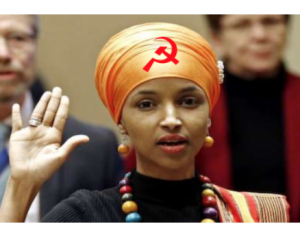 Love to give them both a free one way ticket to the Socialist country of their choice!

better yet. a free walk to the gallows

Why are all these people who are so miserable in America scared to move to a better country and embrace happiness.