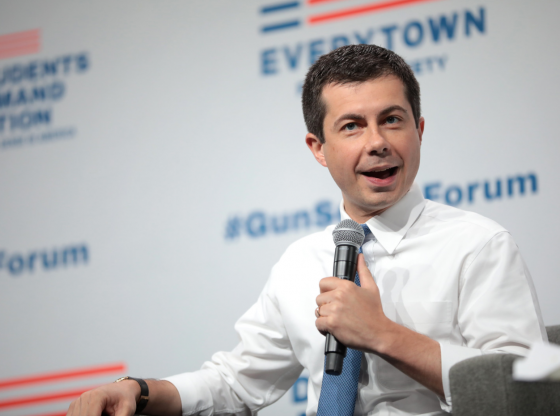 The husband of President Biden’s Transportation Secretary Pete Buttigieg, Chasten Buttigieg, has now been caught on film in a new viral video reciting the LGBT ‘pledge of allegiance’ with a group of children.

U.S. Transportation Secretary Pete Buttigieg’s husband, Chasten, leads children in a modified pledge of allegiance to the rainbow flag at what he described as a “not-so-typical gay camp” in a viral social media video.

On Wednesday night, the Log Cabin Republicans in Richmond, Virginia, posted a video showing Pete Buttigieg’s husband Chasten, leading an LGBTQ youth group in a pledge of allegiance to the rainbow pride flag rather than to an American flag. Chasten had the children repeat after him as they each held their right hand over their hearts.

“I pledge my heart to the rainbow of the not-so-typical gay camp. One camp, full of pride, indivisible, with affirmation and equal rights for all.”

At the end of the pledge, Chasten waved the rainbow flag to the cheers of the LGBTQ youth group.

Report: 1 in 5 Election Officials Likely to Quit Over Increase in Threats
Inflation Rises to 7.9 % in February, Highest Number Since 1982

I feel sorry for the poor child that these two sick and probably demon possessed men just adopted. They will stand before Yahuwah and be judged. Man on man is an abomination to Yahuwah, and then to pervert a young child with that sickness as though it is a normal thing? They are going to be in big doo doo.

Listen up Peter Butt. The Rock of Ages G-d Himself say’s if you lead any of his Little Ones astray that you will Die when you Die. America, G-d Shed His Grace On The.

Texans must scream NO to Pete the Idiot. No vote him to oblivion.

Time to decide America what is too far. This is too far. What are we going to do about it. God is on our side. Take action.

Sodomites will burn in Hell

There’s a perfect way to correct this, a tall tree and a short rope. Followed by the words, “you shall hang by the neck until dead”. That or put all “LGBT all capital letter” mental cases in hospitals for the mentally ill. That truly is where they belong.