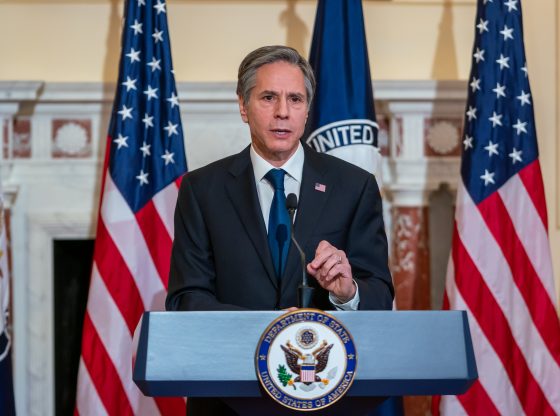 The House GOP is now reportedly set on taking the unprecedented set of introducing articles of impeachment against current US Secretary of State Anthony Blinken after a terrorist attack on the Kabul airport resulted in the deaths of 13 US service members on Thursday.

FIRST ON FOX: Two House Republicans are introducing articles of impeachment on Friday, arguing that Secretary of State Antony Blinken failed to properly advise the president and abandoned American interests in Afghanistan.

“Secretary Blinken has failed to faithfully uphold his oath and has instead presided over a reckless abandonment of our nation’s interests, security, and values in his role in the withdrawal of American forces and diplomatic assets from Afghanistan,” reads the articles.

They add that “[i]n direct conflict with the intelligence and advice provided by his own diplomats and the intelligence community, Secretary Blinken failed to advise and counsel the President accordingly and did not inform the Congress nor American citizens at home and abroad of the dangers.”

The move by Rep Ralph Norman, R-S.C., and Rep Andy Harris, R-Md., comes as many Republicans have called for some level of accountability for the attacks that left 13 U.S. service members dead Thursday.

In a tearful speech on Thursday afternoon Biden attempted to take full responsibility for the debacle, but will there be any actual accountability? Let us know what you think in the comments below.

SCOTUS to Hear Challenge to…

Herschel Walker to Speak at…

‘The Medical Rebel’ Blows The…

Bidenis definitely accountable as the “President” of the United States – and I use that word loosely -as he was never honestly voted in, he is incapable for health reasons to lead this country, no one on his “team” is capable in their assigned positions, and the whole reason to run was to win so he could turn back all the changes that President Trump did to truly make this country great again as we have has so many -though not all – incompetent people run our country. Check out Lara Logan, Tucker Carlson, Hannity , Pete Hedgseck (sp?) and a couple of others on Fox News Channel and our Fox Nation. So much to more information to know from these individuals.

Democrats have never faced or stood for their errors of responsibility, but they are very adept at sticking
together and sending conservatives to jail.

Good move—the next to be put on trial should be Nancy Pelosi for what she didn’t do before January 6th ( by refusing the President’s offer of using the National Guard) and what she has done since (refusing to release for viewing the 14,000 Hours of video coverage) to possibly cover up involvement of undercover F.B.I. and the ANTIFI players—-and what I was shocked by, the Capitol Officers inviting people in—Americans deserve an explanation and I should think Congress as well—that is unless it was all an attempt to sheep dip Trump???

Do you guess we could also her her accountable for all the time and taxpayer money she has wasted on her TRUMP witch hunts !!!

Why does Pelosi get away with all the above? She is so anti-American, I would call her treasonous but I am just a “lay person” (with a brain)…

Former British commander of the British Afghan forces, Colonel Richard Kemp, has suggested that Biden not be impeached. Instead, as commander-in-chief of the Armed Forces he should be court marshaled. Justice will be served if he were found guilty, and then Kamala Harris would pardon him either based on insanity or compassion or both. When the President of the United States has to be instructed by his subordinates which reporters to call on, and then even worse, doesn’t have the sense not to announce that to the world, he should be removed from office, unfortunately. Unfortunate because of the damage it does and has done to the country and unfortunate because his successor is just as unqualified to be the leader of the free world. Amazes me that a vice president who is in favor of teaching children to hate one another can serve a president who puts a 20 year enemy in Charge of getting Americans out of Afghanistan. December 7, 1941 was a day of infamy,but August 31, 2021 will be known as a day America shamed itself.

ce (refusing to release for viewing the 14,000 Hours of video coverage) to possibly cover up involvement of undercov

faithfully uphold his oath and has instead

Let’s impeach the entire administration of lying, cheating traitors while we’re at it.

That has to be done, All of the administration plus Obama, Susan Rice, Valerie Jarrett

My vote is Court Marshall. Impeachment won’t go anywhere! Doubt even Manchin or Semina would vote with us. Thoughts???

Not only Blinken, but the the Secretary of defense, joint chiefs of staff and numerous other incompetent generals.

Iost all faith in U.S. gov…

LISTEN UP…ALL of PREZ BIDEN’S ADVISORS Have Got to GO. THEY are ALL IMCOMPETENT. YOU Have to Have the RIGHT STRATEGY to Win a CHESS GAME. The SAME GOES with WINNING a WAR. When GOD’S BLESSING is with a MAN…HIS ENEMIES are at HIS FEET just like KING DAVID. From SamuraiQueen. 😄😄😄

They’re not going anywhere! It was the impostor prez who CHOSE them! The buck stops there.

America is out of bucks to stop anywhere. IMPEACH them all.

Why Blinken?? The buck stops at the top. This criminal Biden is the same commie who in 1975 scuttled President Ford’s efforts to evacuate Vietnamese citizens who were on OUR side, helping our troops against the Viet Cong.

Now Bribeme is allowing 100,000 Afghanis – many of them Taliban terrorists – into the states unvetted, untested for Covid, while leaving AMERICAN citizens to stew in their juices on the ground in Afghanistan helpless and hapless.

What the hell is going on??

It has to do with the chain of command! THE! BUCK DOESN’T STOP AT THE SOCK! PUPPET! IF YOU HAD SERVED IN THE MILITARY OR GOV. AS I HAVE. ONE WILL UNDERSTAND HOW MANY ARE INVOLVED IN MAKING STUPID! DECISIONS!

Blinken is not the only person that should be impeached. Biden, Harris, Pelosi, AOC, Omar and any other presidential confidant, or advisor that did not come forward to tell America what Biden was doing. Complicity is just as bad as the actual offense as it usually leads to a Conspiracy. If any of our Field Grade or General Grade military personnel that advised Biden to withdraw the way he insisted on, should be court martialed and imprisoned. Biden and the others should be charged with treason and tried. If the military and other politicians did not go along with Biden and advised him of his debacle, they should come forward and testify against Biden and Harris or else face treason charges. But you know the democrats, nothing will be done unless Republicans and conservatives get it done. God Bless our military personnel and their families and God Bless America.

Good, but don’t stop with him, hidenbiden,harris,milley,austin,sullivan, and allmother minions,involved with this disaster and catastrophe,. They all need to arrested and held accountable for deaths of our marines/soldiers, in fact they need to be charged with treason and espionage. No mercy, our military had none.

The SICK! PUPPET! SOB! STORY? When days before he LAUGH! And said he takes, ZERO! RESPONSIBILITY! THIS! ASS! CLOWN! HAS TURNED EVERYTHING HIS WHOLE LIFE to SH#T! & CORRUPTION!

The entire group of treasonous so called experts need to be impeached and charged. Biden first.

i am not against this impeachment but biden should be court-martialed in a military court, at a minimum.is bosses should be hunted down and killed like the terrorist they are. You kniw soros, bloomberg and the owners of big tech, zuckerberg, the whole group…

Seriously? Anyone who thinks ANY member of this circus is going to be held account is a prime candidate to buy some Jersey swampland. These are democrats. Very soon we’ll be seeing the bleating jackasses in the media trying to pin this on President Trump too.

Nothing will be done to “Slo” Joe, articles will be drawn up and he will suddenly be declared mentality
incompetent due to a “stroke” which we all saw happen live on TV. He will, as usual, waltz away from
any criminal charges into obscurity and Karmela will take over then she will drop out due to the 25th
and piss ant Nancy will like the troll from Hell take over. This has been their game plan all along and
the fall of Afghanistan has given them the opportunity they were looking for. All a charade to cover
up the corruption and violation of our election process to remove President Trump before he took
them down for Insurrection, and sedition as the Communist Socialist Democrat party plans and
plots to destroy our Nation and destroy our Constitution and Bill of Rights. Be forewarned there
is a Civil War Brewing and they are pushing hard so they can declare Martial Law to complete
the overthrow of our Government.

biden and his whole administration need to be impeached and the rightful winner seated!

Impeach blinkin and impeach the biden administration and all of his minions as well.

Impeach this POS with no retirement

Impeach them all and don’t let them steal another election.

Blinken, Winken and Nod-off Biden are not qualified to lead this Country. So far, they have proved to be very destructive!

The Buck stops with Biden. Period! When any person in the cabinet serving him, speaks or acts, for Biden at his bequest he is ultimately responsible, and in addition to the action taken against that individual, he should face the same action.

for some level of accountability fo

abandonment of our nation’s interests,

Blinken has failed to faithfully uphold

t with the intelligence a

Biden is a liar and doesn’t give a damn about the US Military, he is the biggest disgrace this country has ever had!

but Pelosi still looks good for ninety five ,the best looking witch looking for a stake …

he should impeached or removed using the 25th amendment

Probably difficult to impeach a president who never was elected president in the first place. 81 million votes?? He couldn’t get 81 people at a rally.

Blinken will rue the day he defends Biden, Doesnt he know when Biden goes he will go with him, Biden IS a sinking ship! Blinken is not smart He is he is defending a treason act if he takes Miley part. Distance yourself from Quickly You are considered (a weak link and will inherite the blame,) next to Harris. Hilary was Obamas failure over Benghazi, and now YOU are Bidens blunders scape goat. Slip out the back befor it REALLY gets BAD!