The exclusive quote from Clinton came from Vitali’s new book, “Electable: Why America Hasn’t Put a Woman In the White House … Yet,” a political memoir about her time covering the female candidates of recent U.S. presidential elections.

Politico published an excerpt of the book on its website, which focused on the Democratic primary for the 2020 election, particularly Sen. Elizabeth Warren’s, D-Mass., campaign, and the debate night row she had with rival progressive candidate Sen. Bernie Sanders, I-Vt., over comments he allegedly made in 2018 that “a woman couldn’t win” the election.

As Vitali’s book recalled, during the now infamous 2020 Democratic primary debate night, moderator Abby Phillip of CNN addressed Sanders: “CNN reported yesterday, and Senator Sanders, Senator Warren confirmed in a statement, that in 2018, you told her that you did not believe that a woman could win the election.” She then asked, “Why did you say that?”

Vitali recounted Sanders’ quote, in which he claimed, “Well, as a matter of fact, I didn’t say it. And I don’t want to waste a whole lot of time on this, because this is what Donald Trump and maybe some of the media want. Anybody who knows me knows that it’s incomprehensible that I would think that a woman couldn’t be president of the United States.”

What a CORRUPT LOSER SHE IS…..

Piranhas will attack other piranhas that are injured. Hope this explains this story.

If ANYONE should’ve been raided by the FBI, it’s this b–ch! 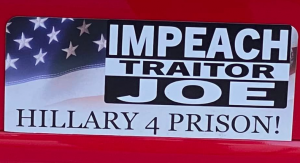 Give it up you distasteful old Frump!!