Hannity Pushes Viewers to Get Vaccine 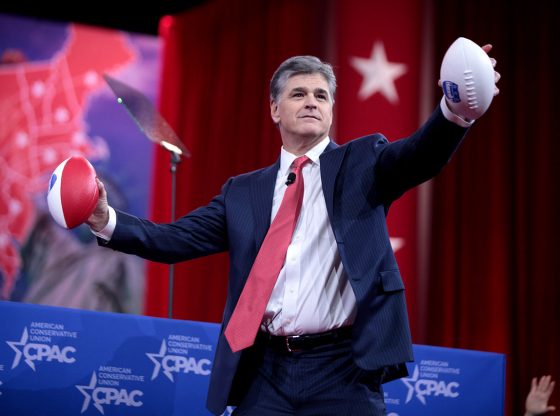 Fox News host Sean Hannity is urging viewers to receive the COVID-19 vaccine saying he “believes in the science of vaccination.”

On Monday, Hannity said to viewers, “Please take COVID seriously, I can’t say it enough. Enough people have died. We don’t need any more deaths,” Hannity said on his prime-time show. “Research like crazy, talk to your doctor, your doctors, medical professionals you trust based on your unique medical history, your current medical condition, and you and your doctor make a very important decision for your own safety. Take it seriously.”

The Fox News host also touched on the importance of privacy and doctor-patient confidentiality.

Hannity’s message to viewers is distinctly different from perspectives pushed by other popular hosts like Tucker Carlson. The “Tucker Carlson Tonight” anchor has stressed the importance of privacy for Americans and their right to choose which lambasting those who try to guilt healthy Americans into getting a vaccine they don’t want.

Liberal media networks and Democrats have attempted to claim that it’s only Republicans who have expressed vaccine hesitancy however a new poll destroys their virtue signaling narrative.

Sorry Sean,why would I want to poison my body with an experimental vaccine when my natural defense ie my immune system is healthy and doing the job just fine. If it was as good as they claim people would be lining up for it. So far this year the vaccine has killed 9,000 people within 48 hours of taking it, and seriously damaged nearly a half million more. Sounds like the cure is worse than the virus.

Pure poison don’t take it I call people that have taken it “dead Man walking”.

It’s very disappointing that highly intelligent people like Hannity and Mark Levin have been duped. These new “vaccines” are killing and injuring more people than this so-called deadly virus. Both have bought into the medical establishment vaccine ideology. Proof that everyone is susceptible to propaganda. Medicine is not in their wheelhouse. They shouldn’t be urging viewers what to do or not do medically anymore than the government.

You obviously have not listened to Hannity but only what was said ‘he said’… over and over, he stresses he is NOT giving vaccination advise to people! He has simply and clearly stated, it is a personal choice to be made in consult with ones own doctor taking into account ones own personal medical history and condition. If those that have done the research opt in our out of vaccination that is their personal choice.
You’ve bought into yet another fabrication of what is actually being said .

I retail it is the “slow movers” that GO ON SALE, or get repackaged in a big red box.

Let’s see, this shot, I won’t call it a vaccine has been existence for about nine months. Human trials won’t be completed until 2024. The MSM refuse to provide the information on how many people have died from this shot or gave gotten irreversible damages . The FDA is not requiring their employees to get this shot, so that tells a lot right there .

regardless there is something called the GINA Act of 2008 that makes it against the law for people to be discriminated against if they choose not to get this unapproved shot. (Shots in general)

hannity, you can take your ‘vaccine’ and stuff it where the sun doesn’t shine. This IS the United States of America and not communist China.

I saw that segment. Hannity was not “pushing” anybody to get the vaccine. His main point was to “take it (the CORONA virus) seriously”. That might be a bit condescending, but it is hardly “pushing” the vaccine. He was very clear about getting infomed and talking to your doctor, that you trust, and taking your personal situation into account, making an informed decision. Nothing wrong with that.

not good enough in the war for humanity …

Hell will freeze over…. When 300 riots were approved and condoned during a pandemic… And when illegal immigrants are pouring over our borders without even being tested I can only surmise that this virus isn’t that dangerous !

You morons out there who think you are impervious to Covid should at least have a bit of sympathy for those who actually aren’t. Whatever downside there is to the vaccine (and there probably is) is secondary to getting this crap handled and out of our economic future. We cannot afford another shut down.

Sean, how come the radical change? What happened? Did your new wife, She Who Must Be Obeyed, lower the boom?

I stopped with Hannity and I will with Levin to if this is there spin on this experimental shot. It is my body and my choice and I do not see any good from these exp shots at all. Hannity doe snot surprise me as much as Levin

I wonder how much money somebody paid him for this. Maybe even our tax dollars? Pathetic!!

Hannity said, quote: “you and your doctor make a very important decision”….. he NEVER SAID he recommended that people blindly go get the “vaccine”. He literally said, “Research like crazy, talk to your doctor, your doctors, medical professionals you trust based on your unique medical history, your current medical condition”…. That’s more than a hint that there is a lot more information available than what we are hearing on mainstream “media”. In other words, do some research, then make an actual informed decision.

just a four more minutes and the light will shine even for Hannity – there is no C-18 1/2 ,there never was virus , the killer vaccines ARE THE GLOBAL PANDEMIC ” and see if censorship still chokes our freedom and humanity – if you read this – then there is a rip in the dark clouds – if not then “fact checkers ” must all get vaccinated – NOW !!

[…] Find More to that Topic: thehollywoodconservative.us/articles/hannity-pushes-viewers-to-get-vaccine/ […]