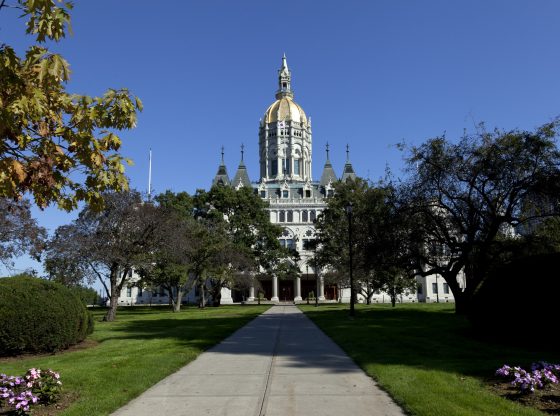 The Connecticut State Capitol is located north of Capitol Avenue and south of Bushnell Park in Hartford, the capital of Connecticut. The building houses the Connecticut General Assembly; the upper house, the State Senate, and lower house, the House of Representatives, as well as the office of the Governor. Built: 1872-1878. Architect: Richard M. Upjohn with James G. Batterson.
News |

A cause for celebration in Connecticut as the GOP has flipped a Dem-held seat in that state’s senate.

Republicans flipped a state legislature seat in Connecticut on Tuesday night, in a huge victory in a district President Joe Biden won by over 25 percent in the 2020 election. Republican Ryan Fazio decisively defeated Democrat Alex Gevanter in the state’s 36th Senate District and ended the state Senate’s Democratic supermajority.

Biden won this district by 25 points in 2020 and tonight, we flipped it RED!

The RNC was proud to work with the @CTGOP to get out the vote.

Congratulations to @ryanfazio for flipping Connecticut's state Senate District 36 from 🔵 to 🔴! pic.twitter.com/dL22vF9Ojj

His victory demonstrates that the people of Connecticut are sick and tired of the radical tax and spend agenda coming from Democrats in Hartford and in Washington, D.C. (3/6)

it’s more important than ever that we have strong Republican leadership in the states.

Tonight’s result is further evidence that Republicans are on offense this cycle, and the RSLC has no intention of slowing down when it comes to winning the tough fights ahead of us. (5/6)

The RSLC will continue to support state Republicans to ensure wins like this so that we can grow the future of our party and stop socialism from spreading to the states.” (6/6)

A big win for Republicans as Biden’s approval numbers have dipped to their lowest point yet, and a new poll shows that a majority of Americans think Biden is a weak leader.

The next election to see the health of the Democrats is in blue state Virginia where there will be a gubernatorial election.

“…(I)n a district President Joe Biden won by over 25 percent in the 2020 election.” Sure sounds like a bunch of morons live in that district.

Mario the sky is falling

This sounds like this is a viewing for what’s going to happen in the mid-term states elections. Americans are sick and tired of all these democratic Disasters one right after another? Even hard core democrats are jumping ship.

People are learning that the Democrats are not for the American people, Just look at what Biden has done, Biden is giving illegals more than what the American people get, But he wants the American people to pay for it, DEMOCRATS do not SUPPORT AMERICA . Biden and his democrats do not support our TROOPS , POLICE, The CONSTITUTION, or the AMERICAN FLAG. Time to get RID of democrats.

WE NEED MORE OF THIS TO TAKE THIS COUNTRY BACK. NO MORE RUNNING FROM ISSUES. TAKE THEM HEAD ON. TERM LIMITS, BALANCED BUDGET, STOP SPENDING, AND NO MORE FREE GIVEAWAYS.

Ain’t it about damn time?

That’s great, but only if he is a true conservative and not a RINO like so many.

It’s time to turn things around. Unfortunately we will still be fighting liberals on many issues. But it’s a start

[…] Info to that Topic: thehollywoodconservative.us/articles/gop-flips-dem-held-seat-in-connecticut-senate/ […]