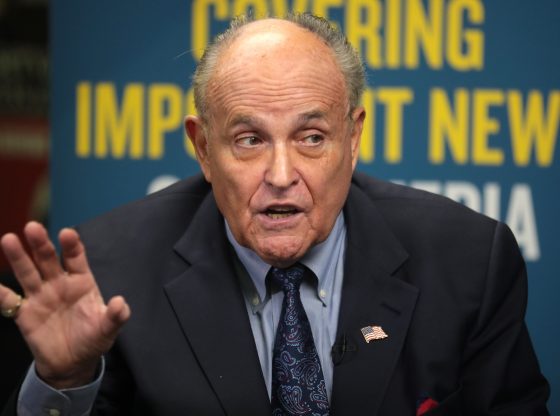 According to reports, a controversial former lawyer to President Trump, Rudy Giuliani’s communications director has resigned.

Christianné Allen, the 22-year-old MAGA influencer who joined Giuliani’s team in August 2019, has resigned her post at Giuliani Communications LLC effective this week, The Daily Beast has learned.

Allen says she has been replaced by Todd Shapiro, a former spokesperson for Lindsay Lohan’s family who also claims to have represented Trump properties, Rep. Carolyn Maloney (D-NY), and Hooters of Long Island and New Jersey.

Allen, who traveled extensively with Giuliani and spearheaded a number of efforts to modernize and expand the former New York mayor’s social media and digital presence, said in a statement that she felt “incredibly blessed” to have served the role, and was signing on with a new startup company whose name she wasn’t at liberty to reveal yet.

“As I reflect, I am proud of the accomplishments we achieved. One of which was building Rudy Giuliani’s Common Sense podcast from conception to one of the top political podcasts in the country in under a year,” she said. “Looking forward, I once again feel blessed to have the opportunity for continued growth and development within a rising tech startup.”

The new shift in the Giuliani camp comes after the New York State Bar took away Giuliani’s license and he faces multi-million dollar lawsuits from Dominion Voting Systems regarding 2020 election claims.

it is not to smart to hire them right out of the diapers ,they will just fall for another sandbox …

Dominion are extremely arrogant. They are trying to sue Rudi, Giuliani, Sidney Powell, , Lin Wood, Mike Lindell for speaking the truth and uncovering their evil behaviour
If it wnt to Court, all their dirt would be uncovered

Charter Spectrum was found to commit a felony -- shouldn‘t CEO be fired?

[…] Read More on to that Topic: thehollywoodconservative.us/articles/giulianis-comms-director-exits-team/ […]

[…] Here you will find 44112 additional Information to that Topic: thehollywoodconservative.us/articles/giulianis-comms-director-exits-team/ […]

[…] Read More on that Topic: thehollywoodconservative.us/articles/giulianis-comms-director-exits-team/ […]