“In contrast, Russian elections are rigged,” he said. “Political opponents are imprisoned or otherwise eliminated from participating in the electoral process. The result is an absence of checks and balances in Russia and the decision of one man to launch a wholly unjustified and brutal invasion of Iraq. I mean of Ukraine.”

Bush shrugged and said, under his breath, “Iraq, too.” Russia has not invaded Iraq, and the Kremlin reportedly gave Saddam Hussein’s government intelligence to combat the U.S. invasion early on.

Bush presided over most of the war in Iraq, authorized by a bipartisan vote in both the U.S. House of Representatives and the U.S. Senate in Oct. 2002. The war, which lasted until 2011, claimed the lives of more than 4,000 U.S. troops, along with those of tens of thousands of Iraqi civilians. Critics have long faulted Bush for the war, claiming that Iraq did not possess the weapons of mass destruction Bush feared.

It wasn’t long before Twitter got hold of Bush’s blunder and began criticizing him.

“Oof. If you were George W. Bush, you think you’d just steer clear of giving any speech about one man launching a wholly unjustified and brutal invasion,” former Rep. Justin Amash tweeted.

If you were George W. Bush, you think you’d just steer clear of giving any speech about one man launching a wholly unjustified and brutal invasion. https://t.co/8zdH0ogOAy

Bush is criticizing Putin. “In contrast, Russian elections are rigged,” he said. “Political opponents are imprisoned or otherwise eliminated from participating in the electoral process.”

Has Bush checked out Biden lately? All he has to do is replace the word Russian with the word American in that sentence,

It seems all of you have Bush derangement syndrome. I can’t understand the hate for George W Bush I see coming from my fellow conservatives. 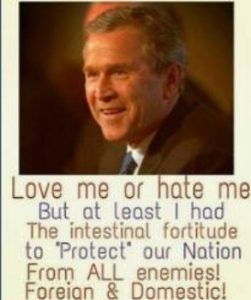 Seems to be the norm for American politics is to belittle ourselves to WIN in America. We are our worst enemy! Our politicians keep trying to outdo the others so the image we cast to the rest of the world is as confusing as we can possibly make it.

Is Bush dealing with dementia too? He should not have given this speech as well as some previous ones where he badmouthed a Republican President which made him look like a RINO! We are all for Presidents who keep the Country and it’s Citizens safe and we acknowledge that Mr Bush did that after 9/11.

Jeex, folks, ’twas but a tip of the slongue! Cut the poor devil some slack.