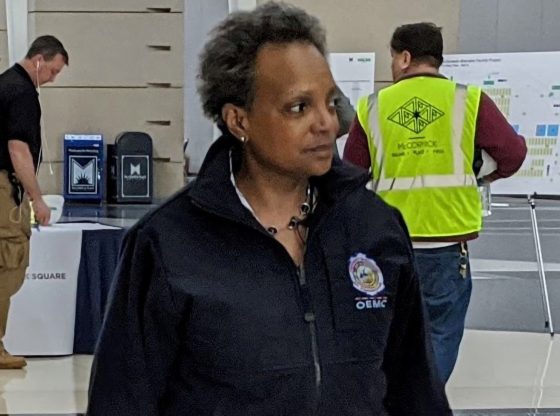 Chicago Mayor Lori Lightfoot visits the COVID19 Alternate Care Facility at McCormick Place in Chicago April 1. 500 patient beds were completed within five days. The Army Corps of Engineers, Chicago District, in support of FEMA, the White House, Department of Defense and the state, are currently constructing approximately 4000 COVID19 patient rooms at four ACFs within the state of Illinois.
News |

Chicago Mayor Lori Lightfoot is losing supporters left and right. At a recent fundraiser, Lightfoot was hit with loud boos from the crowd. The organization that booed Mayor Lightfoot was the first union to endorse her in 2019; The Plumbers Union Local 130.

The mayor “spoke for less than a minute. And there was a resounding booing throughout the room,” one reported attendee told the paper. “Almost deafening … I was sitting at the table with a bunch of plumbers. They’re like, ‘We’ve never heard that before here.’ … Clearly, their membership is not with her. … They were calling her names. It was bad.”

In video of the booing incident, one person is heard saying, “I knew that was going to happen.” Another seemingly says, “That’s f***ing brutal.”

Plumbers Union Local 130 recording secretary Pat McCarthy admitted that she heard the booing but said Lightfoot was able to finish her remarks, rebutting a notion that she was technically “booed off the stage.”

“I was there when she was speaking,” McCarthy said. “There were a couple of people in the corner that booed. But it was nothing significant. And it didn’t disrupt the event at all.”

A spokesperson for Lightfoot also attempted to downplay the booing.

Report: Biden in Talks to Give Illegal Aliens $450K Each
Biden Claims Pope Told Him He’s a ‘Good Catholic,’ to Keep Receiving Communion

Ah, I see. Liberals have redefined the meaning of the word “few” now too. The depths they sink to to LIE to the people around them is simply amazing.

A “few” in the corner. LOL. Another article said she was “warmly greeted”.

And Joe Biden has total control of his mental faculties and has never violated the Constitution or any other established law. Well, according to the Liberal Media and Democrat Party. LOL

And the nation dissolves a little more every day. That isn’t funny.