A far-left wing professor at Harvard University is now accusing Tucker Carlson and what he calls the ‘Trump’ wing of the GOP of treason for daring to oppose U.S. involvement in the conflict between Ukraine and Russia.

A left-wing Harvard Law professor drew fierce criticism for suggesting that Fox News host Tucker Carlson and the “Trump wing” of the Republican Party could be considered as backing Russian President Vladimir Putin and committing treason for their remarks opposing the U.S. intervening in the conflict in Ukraine.

“Led by Fox News Channel’s Tucker Carlson, the GOP’s Trump wing appears to be throwing its weight behind Putin. If Putin opts to wage war on our ally, Ukraine, such ‘aid and comfort’ to an ‘enemy’ would appear to become ‘treason’ as defined by Article III of the U.S. Constitution,” Laurence Tribe wrote early Monday morning in a now-deleted tweet.

Tribe’s tweet was aimed specifically at Carlson, who has dedicated multiple opening monologues to the issue of Russia and Ukraine, expressing his opposition to U.S. intervention in the conflict and prioritizing the problems at the U.S.-Mexico border over the Ukraine-Russia border.

Legal experts and Twitter users quickly pointed out that Tribe had gone too far, and that there was not a Constitutional argument to bring treason charges against Carlson or others.

Tucker has been one of the lone voices on the Right to oppose pro-Ukrainian intervention.

I strongly disagree on foreign policy matters. I really do! This absurd charge made by this loon has no merit! Just b/c Tucker opposes this war does not mean he supports Putin! All he opposes is our involvement in this conflict. My G-d, WTF is wrong w/ him having this belief?? 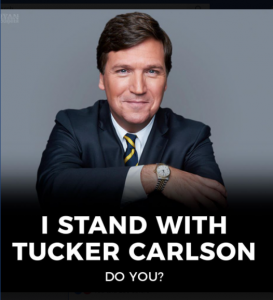 I’ll bet there are many who feel the same way. What reason do we have to go to war? Why are we always wanting to tell others how to run their countries? Or how to fight THEIR wars? We have plenty to fix in our own country. It’s in a mess.

Kill babies. Defund the police. Open the borders to illegal aliens. It’s OK to give Al Queda 80 billion of our military equipment. Why would anybody give a fok about any opinions of Harvard, Princeton or Yale law professors? What have they accomplished in their lifetimes other than to undermine our Constitution?

This fool of a professor must be a fan of ol’ hillary or she’s a fan of his. They both spew the same garbage. Since when does a difference of opinion equal treason? We have the right to make up our own minds without asking permission of some elites if we may have a different point of view. Some of us don’t like the idea of being sucked up in another war that is none of our business and not of our doing. We’ve had enough wars in our lifetime.

The Democrats are the treasonists.

The are trying to destroy the U.S.A from within