Facebook Launches New Round of Censorship Ahead of Nov. Elections

On Tuesday, Meta, which owns Facebook and Instagram, has announced it will be gagging all political ads ahead of the November General Election.

Meta President Nick Clegg wrote that the social media titan has hundreds of people spread across 40 teams focused on the U.S. midterms. Mr. Clegg is a former U.K. deputy prime minister and leader of the Liberal Democrats who handles Meta’s interactions with governments around the world.

“Our teams fight both foreign interference and domestic influence operations, and have exposed and disrupted dozens of networks that have attempted to interfere with U.S. elections,” Mr. Clegg wrote on Meta’s blog. “We’ve banned more than 270 white supremacist organizations, and removed 2.5 million pieces of content tied to organized hate globally in the first quarter of 2022.”

Mr. Clegg said his company is spending money on “proactive threat detection” and would expand its policies to address coordinated harassment and threats against election officials and poll workers.

Following from its 2020 playbook, Meta is also planning to pause all new political, electoral, and social issue ads in the final week before the 2022 election. Ads that have previously aired will continue to do so but any edits of the existing ads will also be blocked.

Clegg wrote, “Our rationale for this restriction period remains the same as 2020: in the final days of an election, we recognize there may not be enough time to contest new claims made in ads.” He added, “This restriction period will lift the day after the election and we have no plans to extend it.”

Right. Gagging all political ads that go against their agenda.

I cannot believe there are 270 ‘White Supremacist’ organizations. There might be 5, for the USA. no matter what the Marxist goons would lead us to believe, is NOT a racist nation. What it means is that someone uncomfortable with right-wing patriot organizations is labeling them FALSELY. Don’t deal in lies, Recall from Scripture that the Lord has a special place for those who love a LIE.

Interesting how BLM & anti-Semitic groups like them haven’t been banned yet. Hypocrites all! As 4 political ads, we all know only one side will be censored.🤬 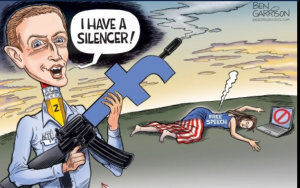 WTF! I just clicked on the + sign for Stephanie Wilson’s comment and a small red banner popped up in the upper right hand corner that said, “You are not allowed to vote for this comment” WTF!!

WTF is right! Something weird’s going on. The same thing happened to me last month! TY for your like & everyone else’s too!

I get that all the time, one reason I quit reading and commenting on this page. I’ve even reported it multiple times.

Oh man. That s*cks. I totally understand, but I wouldn’t give up. I hope to see you here anyway. Ya know? If we quit, they win.

This says it all.

We stay away from FB 95% of the time and never post anything political. That’s why we have all the good sites like Hollywood Conservative!

Get woke, go broke. Facebook is going to lose if it keeps up this witch hunt of conservatives.

I recently got put in Facebook “jail” for my refusal to kiss liberal butt. 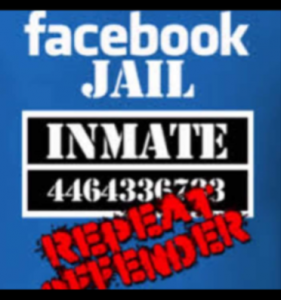 HELLO, COMRADE! We now have NWO A-HOLES in charge. I don’t use all that BS. Just a commie spy network for China and NWO. Stupid kids can’t get off their phone to wipe their ass. Welcome to SLAVERY people. Another reason they want your guns, so when they start rounding you up you can’t fight back,