BREAKING: Donald Trump sues Hillary Clinton and several other Democrats, alleging they tried to rig the 2016 U.S. presidential election by tying his campaign to Russia – Reuters

On Thursday, Donald Trump sued Hillary Clinton and several other Democrats alleging they intentionally attempted to sway the 2016 election by claiming Trump’s campaign was connected to Russia.

“Acting in concert, the Defendants maliciously conspired to weave a false narrative that their Republican opponent, Donald J. Trump, was colluding with a hostile foreign sovereignty,” the former president alleged in a lawsuit filed in federal court in Florida.

Trump, who beat Democratic nominee Clinton in the 2016 presidential election, alleges “racketeering” and a “conspiracy to commit injurious falsehood,” among other claims.

Trump’s allegations in the lawsuit are undermined by a 966-page report issued by a Republican-led US Senate committee in August 2020. That report concluded that Russia used Republican political operative Paul Manafort and the WikiLeaks website to try to help Trump win the 2016 election.

In the lawsuit, Trump is seeking compensatory and punitive damages. Trump said he was “forced to incur expenses in an amount to be determined at trial, but known to be in excess of twenty-four million dollars ($24,000,000) and continuing to accrue, in the form of defense costs, legal fees, and related expenses.”

Biden Says He Would Be ‘Fortunate’ to Run Against Trump in 2024
YUGE Announcement!

It’s about time!! Hopefully this will kead to criminal indictments for Hillary and the rest! The Democrat Socialist Communist Nazi Globalists were shocked that with all the vote fraud they pulled in the 2916 election Hillary still lost. This emboldened them to pull out all the stops to steal thec2020 election. With all the success that Trump had during his term as well as his enormous popularity they knew they had no candidate that could beat Trump in a fair election. So they went overboard in their voter fraud actions , so much so that their crimes were obvious and again pulled out all the stops to deflect any criticism of their actions. Now as more and more of their dirty tricks are uncovered and verified they are in a panic as they look for ways to deflect attention.

They don’t call her better half “Slick” for nothing.

Good, lets hope he gets a real honest judge. 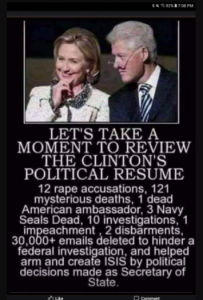 Does the devil and his minions here on earth really control Washington and Our (?) Media?

Long overdue Hillary has been sending people to early “dirt naps’ since the Little Rock days—Vincent Foster is waiting in the wings just to see Hell’s Angels scrape this evil witch from earth.