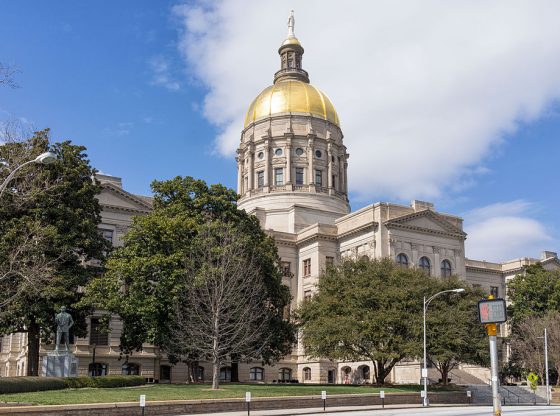 A Georgia state Democrat accidentally let it slip that the state’s new voting bill actually addresses common sense concerns over voting before remembering she had to stick to claims it’s” Jim Crow 2.0.” State Sen. Sally Harrell admitted that the law actually addresses the issue of long lines during elections which can lead to fewer minorities being able to cast their ballots.

Sen. Jeff Merkley, D-Ore., who claimed that the rules were a new form of Jim Crow restrictions, noted how long the bill is – 80 pages – and asked Democratic State Sen. Sally Harrell if any part of it addressed having “a fair number of precincts” and a solution to the problem of long lines, which have kept minorities from voting in the past. As it turns out, she said, it does.

“There actually is a piece of a – a section in the bill that says that if it’s documented that people have to wait for a certain amount of time, that during the next election that precinct would be split,” Harrell acknowledged.

While Harrell admitted that the problem of long lines and number of precincts is addressed by the bill, she then claimed that this was really a “smoking gun” for why the bill is actually detrimental to people’s ability to vote.

“Another tactic that’s been used in the past for voter suppression is the changing of precinct locations,” Harrell explained. “People are creatures of habit. They tend to, if they did something one way once they think that that’s supposed to happen the same way the next time. That’s logical. So the voting location changes … the precinct gets split, they go to where they used to vote, and wait in line, and their name’s not on the roll, so then they have to go someplace else. Or they go someplace and it’s closed, and they don’t know where to go.”

Harrell made the admission to Sen. Merkley while the Senate Rules Committee traveled to the Peach State to hold field hearing over the voting law.

What an insult to black people. Do you think black people are incapable of figuring out when and where to vote? White liberals believe black people need their help because they are too dumb to know how to vote. Give me a break.

Common sense or just a rat caught in a trap? The 4-6 people in Georgia (caught on camera) doing what amounts to “stuffing the ballot box” need to be arrested and booked on multiple felonies–major prison time for their crimes.

If you are registered to vote your name will be on the voter rolls. You look up your name and it will tell you what your voting station is. Every library has internet access. Ask. If you still can’t figure it out then perhaps you are too stupid to vote.

I have lived in Florida since 1985 and my voting precinct has change 8 time and every time it changed I was sent a new card which told me the new location. What you are trying to is that people of color can’t or don’t pay attention to there mail I think that is insulting

These democrats do not speak for everyone only for .00050 of Georgians

NOW TRYING TO TAKE IT BACK. ELECTION INTEGRITY IS OF UTPMOST IMPORTANCE. LEFT AND DEMOCRATS WANT TO INSURE FRAUD CONTINUES. DEATH TO ELECTION FRAUD GUILTY.

[…] Information to that Topic: thehollywoodconservative.us/articles/democrat-walks-back-admission-ga-voting-bill-addresses-key-issues/ […]

[…] Read More on to that Topic: thehollywoodconservative.us/articles/democrat-walks-back-admission-ga-voting-bill-addresses-key-issues/ […]

[…] Information on that Topic: thehollywoodconservative.us/articles/democrat-walks-back-admission-ga-voting-bill-addresses-key-issues/ […]