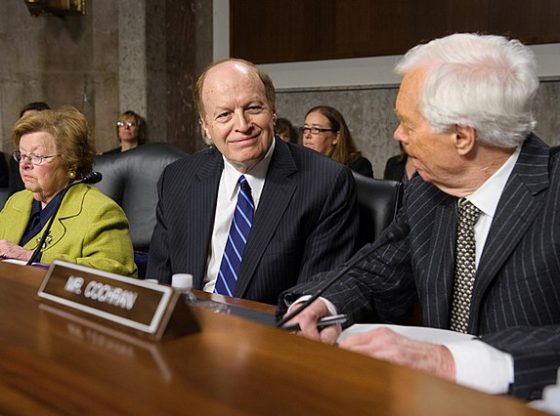 Senator Shelby at the Appropriations Committee Hearing on the Ebola Outbreak via Wikimedia Commons.
News |

The retiring Alabama senator is preparing to pour as much as $6 million into the race by transferring his campaign coffers into a super PAC supporting Katie Britt, a former Shelby aide who is running for the Senate seat. She’s locked in a three-way battle with a stumbling Brooks (R-Ala.) and surging Army veteran Mike Durant, and Shelby confirmed in an interview he’ll do what it takes to ensure that Britt emerges from the May primary with a place in a runoff.

“I’m going to give it all away sooner or later. I’m going to help her, transfer it to a super PAC,” said Shelby, who has nearly $10 million in his campaign account and more than $6 million in a separate leadership PAC. He added that Britt is “doing well right now. Mo Brooks is dropping, you see that.”

Unless one of the candidates clears 50 percent in the May primary, there will be a runoff. And eliminating Brooks and leaving the race to Durant and Britt would amount to a “no-lose” proposition for Republicans, said Sen. John Cornyn (R-Texas), who serves on Senate Minority Leader Mitch McConnell’s leadership team.

“People know what [Brooks] was like in the House. And I think there’s a general desire to have people that will be constructive and that we can work with. So that’s my view, and that’s probably the view of most of the conference,” Cornyn said.

I was under the impression that we the people elect the candidates. There is not enough money in the world to outbid the Soros/Gates gang. There should be a stop to this buying of elections.

Silly goose, didn’t the last election prove it’s not who votes but who counts the votes? Biden is illegally flooding the states with illegals and Pelosi wants no ID required to vote, if that’s not a set-up for voter fraud I don’t know what is

Found out Hunter Biden still has his law license he should have been disbarred a long time ago.

Richard Shelby is a colossal RINO! He’s been there for decades and should have left long ago. The fact that Katie Britt is his underling turns me off to her!