“Instead of the Delta variant, why not call it the DeSantis variant?” Acosta asked. “We could sell beer koozies that say ‘Don’t Florida My Fauci,’ and use the money to help pay for all of the funerals in the days to come.”

DeSantis’ office wasn’t thrown by the CNN reporter’s attack on the governor, instead, saying it just made it clear that the liberal network is intimidated by DeSantis and the fact he doesn’t line up with their liberal narrative.

“It’s clear that CNN, which apparently functions as a PR firm for the Democratic Party, is afraid of Governor DeSantis,” DeSantis spokesperson Christina Pushaw said. “Why? Because he’s leading our state through the challenges of this pandemic while respecting parents’ rights to raise their kids, workers’ rights to earn a living, and everyone’s right to make their own informed decisions.”

“DeSantis,” Pushaw added, “always made data driven decisions and worked tirelessly to prioritize seniors and other vulnerable Floridians for the vaccines, instead of relying on the ever-changing, poorly sourced ‘guidance’ of federal bureaucrats.

His leadership, she argued, is “inconvenient for CNN’s narrative of fear over facts, and that’s why CNN is attacking him.”

DeSantis has been a target by liberal media figures for months because of his approach to Covid-19 and his refusal to impose measures that don’t align with scientific data.

Is it Time to Blame the Vaccine?
Obama Party Was A ‘Sophisticated’ Super Spreader Event!

CNN Nazis can go suck it. 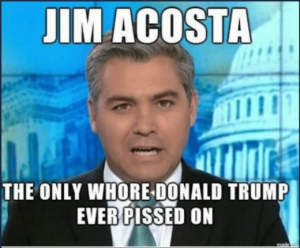 cn-who?????? All of these are just communist propaganda outlets for the communist democrat cult party!

[…] Information on that Topic: thehollywoodconservative.us/articles/cnn-reporter-faces-immediate-backlash-after-proposing-naming-covid-variant-after-ron-desantis/ […]

[…] Here you will find 84235 additional Info on that Topic: thehollywoodconservative.us/articles/cnn-reporter-faces-immediate-backlash-after-proposing-naming-covid-variant-after-ron-desantis/ […]

[…] There you can find 62124 more Info to that Topic: thehollywoodconservative.us/articles/cnn-reporter-faces-immediate-backlash-after-proposing-naming-covid-variant-after-ron-desantis/ […]

[…] There you will find 62024 more Information on that Topic: thehollywoodconservative.us/articles/cnn-reporter-faces-immediate-backlash-after-proposing-naming-covid-variant-after-ron-desantis/ […]