Chuck Schumer Caught in a Lie

Sometimes you just don’t know the answer and in Senator Chuck Schumer’s case he just made something up. And it was wrong.

Senate Majority Leader Chuck Schumer claimed in a recent interview that “all” of the Americans who wanted to leave Afghanistan are already out, contradicting statements by the State Department that a small number of U.S. citizens are still trying to flee the Taliban-controlled country.

During an interview with ABC-affiliated WSYR at the New York State Fair on Friday, Schumer, D-N.Y., was asked how President Biden’s widely criticized ending to the U.S. war in Afghanistan might affect Democrats’ chances in the 2022 midterm elections.

Schumer’s comments came several days before Secretary of State Antony Blinken announced that U.S. officials in Washington had identified a “relatively” small number of Americans seeking to depart Mazar-i-Sharif International Airport and that the State Department was working with the Taliban to facilitate additional charter flights from Kabul, where the last of the U.S. troops departed on Aug. 30.

The State Department has been clear that around 100 American citizens remain who want to leave.

You forgot Schumer is a peeping Tom, and a Voyeur which is listed as a mental disorder.

Are he and Joe B. kind of like mirror images?

Chuck the Schmuck is under Pelosi’s thumb and she controls him like an organ grinders monkey. Remember her main weapon is blackmail and Chuck has plenty of skeletons in his closet.

Surely nobody — nobody — can be surprised that Chuckie lied? It’s standard operating procedure for him and the other demented Democrats. After all, if they weren’t lying and obfuscating, they would never have anything to say! 🙁

Totally agree , chuckie is a lie from day one , reality is chuckie is a born notsie , one of the first of many coming to take America down years ago . He worked his way into our government , so he would have a better chance of distoring America

His lips were moving and he opened his mouth, WEASEL

You my dear just said a mouth full and every word was the truth. Bless you.

Has anayone caught him telling the truth?

I just knew they were going to pull this “everyone who wanted out” crap just from Psaki’s briefing.
Then tell everyone WHY planes are sitting on runways filled with Americans and those who helped.
I read that the Afghans they already evacuated can’t be identified, IF THEY worked with the Troops, their figure print’s would be on file. SO MY QUESTION IS who are these Afghans you brought here??????

We’re probably, unfortunately, going to find out! Hopefully, it won’t be too late!!

No surprise. Schmuck is a lying POS. 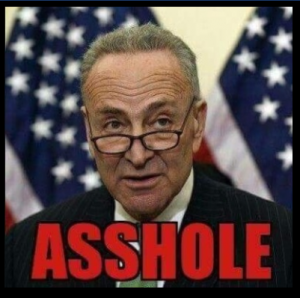 Why is he still in the Senate? Who are the idiots that keep voting for him? I thought
New Yorkers were pretty smart savvy people. Schumer proves me WRONG! They need to pump a lot more oxygen into New York!!!!! Oxygen starved morons look who they voted in as Mayor DuhBlasio and governor Andrew Cuomo!!! Need I say more!?!?

LISTEN UP….GOD Says CHUCK SCHUMER is Good for NOTHING. HIS DAYS are NUMBERED. From SamuraiQueen. 😄😄😄

Catching this piece of trash in a lie IS NOT news, it would be news worthy to find him telling the truth

If 6000, as reported, were the 90% then there are more than the 100 being the other 10%, do the math. They all are lying!
Remove ALL communist democrat cult party members from ALL offices to save our country!

Just one? Are you kidding me. These democrats think nothing of lying to the American people!

They need rid of the liars pelosi & shumer.they left Americans there on purpose this was all planned .they should be sent to prison

A lying politician. My, how shocking..,

All Politicians are LIARS!! Chuck Schumer is one of them!!
This is a Game to most of them or a way to get rich! Filled with EGO!!
Paid for with our Tax Dollars!!
But these Democrats have an Agenda!! and it does not include American Citizens.. They want all educated American Gone!! We are a problem to them! They can’t control us!! Just this morning they proved that Fauci got caught in a huge lie! Apparently “they” our government paid for the Covid-19 virus!!
WAKE UP AMERICA!! WE ARE UNDER ATTACK BY OUR OWN GOVERNMENT!!

The liberals are good at lying. Who does this remind me of? Satan is the father of lies.

And the Lord has a special place in store for those who love a lie. Check your Scripture.

The higher the office, the more the Democrat infesting it lies.

If his lips are moving, then he is lying.

Typical radical, he is a consummate liar like his girlfriend Pelosi. I can’t wait until they are gone.

well after all he is a DAMOCRAP that is all they know how to do is LIE !!! oh cheat and steal . you can tell what class they majored in BEING DECIETFUL THATS THEIR FANCY WORD FOR LYING !!!

Whose going to tell on me. I’m a truthful Democrat.

What happened? Did someone catch him with his mouth moving?