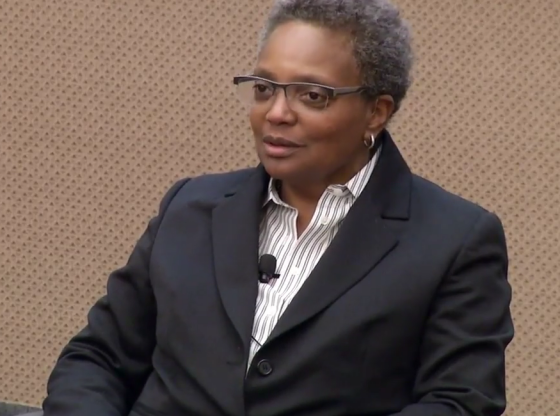 According to a stunning new report, Chicago Mayor Lori Lightfoot is now being accused of only granting interviews to favored reporters who are ‘black or brown.’

As ⁦@chicagosmayor⁩ reaches her two year midway point as mayor, her spokeswoman says Lightfoot is granting 1 on 1 interviews – only to Black or Brown journalists pic.twitter.com/PAUsacD9Gj

And apparently, Ahern wasn’t the only one.

Lightfoot was slammed on social media, facing allegations of racism for choosing to speak with journalists solely on the color of their skin.

Is open racism now the new normal for Democrat politicians, and is there anything that can be done to stop it? Let us know what you think in the comments below.

Everyone know all dems are racists, and they show it proudly, their supporters should be ashamed of themselves.

I think her real name is Lori Elaine LIGHTHEAD!!!! When does she roll up her sleeves and get to work? When she washes her hands!!!!

Lori Elaine Light-in-the-loafers I think it is .

She needs to wash all over but the stink would still be there .

Drive the racists into the sea!

Why would you want to pollute the sea? Even the fish have rights.

This racist mayor needs to be removed from office and legally be charged with these law violations. I’m finished with the media protecting people like this. She’s helping to destroy our country rather than uniting our citizens and serving to lead us to improve our country since we’re all members of the human race regardless of skin color, sex or nationality.

The city is already of her because of her color biden protects her like a little pup.

I would not want to interview this despicable racist fool anyway, so there.

If they are qualified and have the work ethic needed for job-that is all that should matter. She is racist

could you imagine if a white mayor said they would only grant interviews to white journalists??? who are actually the racists here…SMH

Lightfoot is a big races just like obama and biden.

Who wants to hear what she has to say anyway. Chicago is so messed up by all the Democratic politicians it isn’t worth trying to salvage.

Gosh does this mean the mayor is an admitted, instead of a closet, racist ?……

What a POS. Another know-nothing, racist Democrat.

And there are those that say only White people are racist!! Here in Texas we call that “Bull Shit”.
Racism has no color or gender and the Chicago Mayor proves it.

I don’t know Lori Lightfoot but she’s obviously entitled to give interviews only to black or brown people if that’s what she chooses to do! If people like her less for her what would be considered her unpalatable stance, that’s for her to deal with!

She was elected by whites, browns, blacks, yellow, reds! She is NOT entitled to give interviews to one group only! She is a public official! If she can’t handle that, she needs to be removed!!

NEWS! FLASH! SHE KEEPS CALLING FOR MORE GUN CONTROL? YET! DOES NOTHING ABOUT THE KILLINGS & HIGH CRIME! TELL THAT TO THE BAD! GUYS THAT CAN GET ILLEGAL GUNS ANY TIME! THATS HOW STUPID! & WORTHLESS! SHE IS!

The writing is on the wall.. The Leftist Puke Machine is what keeps Raccisem alive.. It’s their number one action to get their way..
We all know ! When things don’t go their way, the first thing they do..
These political leaders are the Root of these problems in this Country… Americans always support each other, no matter the race.. Unless their a corrupt politician..

What’s she gonna say at the interview to the colored-folks at fake-news…what a ‘bang-up job’ she doing, running Chicongo into the ground❓🤣

Only black or brown journalists? Does she have a color chart to decide who is black or brown enough to interview her? At the next election, no doubt she will she refuse to accept votes from any white people stupid enough to vote for her.

Her name should be, BIG! FOOT! But she looks more like, ” BEETLE! JUICE” I don’t think any , WHITE! PERSON! Would even want to interview her! She is a, ” SELF! EXPLANATORY POS! “

Lightfoot is just a lesbin with mans pants on she don’t know one color from another.

Wonder if we all said Beetle Juice three times if she would disappear ? If she isn’t Beetle Juice , she’s his twin sister

Only Fake-news want’s to talk to this ugly-loser-clown from Chi-congo…who frickking care, what color they are❓

Bigot. Racist. She will be fatal victim of the criminal rat hole she created.