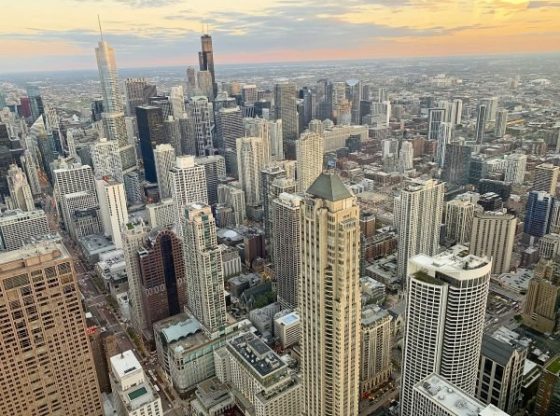 Democratic cities Boston and Chicago announced they would be requiring individuals to show proof of vaccination to enter indoor facilities a day apart this week.

“There is nothing more American than coming together to ensure that we’re taking care of each other,” she said at a press conference as protesters shouted and sang “The Star-Spangled Banner.”

She explained that most of the virus-related hospitalizations were of unvaccinated people, who make up nearly a third of  Boston’s population. The mandate will also require all of the city’s employees to get vaccinated.

“Today’s steps to protect community members in certain indoor establishments and throughout our city workforce will help ensure that everyone in Boston will be safe,” Wu said.

The next day, Lori Lightfoot, Chicago’s democratic mayor, announced similar restrictions that she said were “inconvenient by design” for the unvaccinated.

“We didn’t want to get to this point, but given the situation we find ourselves in, we simply have no choice,” Lightfoot remarked on Tuesday, noting that the city has been averaging 1700 new cases daily.

“The unvaccinated are affecting the health, well-being and livelihoods of all the rest of us, so to control the spread, we have to limit the risk, and a significant risk in our city remains the unvaccinated.”

Residential and office buildings, schools, grocery stores, and churches are exempt from the order. It does not apply to people entering eateries for less than ten minutes that order food to-go.

“If you wish to live life as normally as possible, with the ease to do the things that you love, you must be vaccinated in the city of Chicago starting Jan. 3,” Lightfoot said. “This health order might pose an inconvenience to the unvaccinated, and the fact is, it’s inconvenient by design.”

Leo DiCaprio: THE EARTH HAS…

Citizens of Boston and Chicago, DO ANYTHING IT TAKES TO NEUTRALIZE JANEY and LIGHTFOOT. BOTH BIGOT RACIST AMERICA HATING PIG WHORE TRAITORS. THEY NEED TO BE AMONG FATALITIES OF WEEKEND VIOLENCE. THEY WORTHLESS USELESS SHIT. LIVES WITH ZERO MEANING.

Two more places I don’t have to visit along with the other shitholes I’m boycotting. More money in my pocket to spend at others places believe in our rights.”Beatleguese” lightfoot and McBitch wu are among the STUPIDIST cnt’s around.

Great comment! Mine was not nearly as graphic or direct and I’ve been waiting for 7 hours now for it be approved by the censors.

Funny thing about the vaccine, you can still catch and pass on COVID even when you are fully vaccinated.

The women bosses are trying to prove they’re as tough as joe biden trying to get the unvaccinated vaccinated. It doesn’t work for him, and it won’t work for these tyrannesses.

“The unvaccinated are affecting the health, well-being and livelihoods of all the rest of us, so to control the spread, we have to limit the risk, and a significant risk in our city remains the unvaccinated.”

The stupidity of this statement is astounding. If the vaccine actually did what it claims to do the vaccinated would have nothing to fear from the unvaxxed.

“The most terrifying force of death comes from the hands of ‘Men who wanted to be left Alone’.
They try, so very hard to mind their own business and provide for themselves and those they love.
They resist every impulse to fight back, knowing the forced and permanent change of life that will come from it.
They know the moment they fight back, the lives as they have lived them, are over.
The moment the ‘Men who wanted to be left Alone’ are forced to fight back, it is a small form of suicide. They are literally killing off who they used to be.
Which is why, when forced to take up violence, these ‘Men who wanted to be left Alone’, fight with unholy vengeance against those who murdered their former lives.
They fight with raw hate, and a drive that cannot be fathomed by those who are merely play-acting at politics and terror.
TRUE TERROR will arrive at the Left’s door, and they will cry, scream, and beg for mercy, but it will fall upon deaf ears”
Source Unknown.

Dumb, evil Democrats can see only their lust for political power over others. They couldn’t care less about the health of the people, or they would follow the science, that tells them that the so-called “vaccines” DO NOT WORK. Is it time to outlaw the Democrat Party in America?

A supposed conservative site that is censoring the comments section? Guess freedom of speech isn’t very high on your list of values?

Such mandates are illegal and therefore should be disobeyed.