The left has finally gone too far.

The Catholic University of America, which refers to itself as the pontifical university of the Catholic Church in the United States, now features a painting of George Floyd depicted as Jesus Christ. The painting in its campus ministry office and outside the chapel at its law school imitates Michelangelo’s immortal Pieta except it features the face of Floyd.

From @MaryMargOlohan: Prints of a painting depicting George Floyd as Jesus Christ hang in The Catholic University of America’s ministry office and its law school, The Daily Signal has learned. via @DailySignal https://t.co/1qHuUa7yYl

Students at the university have noted their discomfort with the painting but noted their concerns of being labeled racists for publicly condemning the piece of art.

“The icon has no place at The Catholic University of America; it is blasphemous and an offense to the Catholic faith, but it is not surprising at all that it was put there,” one stated, “It is just another symptom of the liberalization and secularization of our campus.”

“There are many students, faculty, and staff who are concerned about this, but there is nothing we can do,” the student continued,  “And if we sound the alarm, we will be labeled racists.”

Another echoed, “George Floyd is not Jesus Christ. … He is not a saint, nor a martyr, and to, in any way, compare him to the sinless son of Almighty God is to do a damning disservice to the vast majority of Catholics and Catholic theology… It is damning anywhere, but especially at *THE* Catholic University of America, where this painting was purchased, unveiled, and hung up without input from student leaders.”

A third student said, “Nobody should be portrayed as Jesus except” Jesus. “It highly disappoints me that someone else is being depicted as Jesus Christ in the Pietà to begin with, [and] being right at the doors of a chapel makes matters worse. … Replace it with a photo of Floyd, I can care less, but to put up something clearly blasphemous defeats the mission of the university.”

Will the university listen to its students and take down the so-called “art” or bow to liberal organizations like Black Lives Matter? 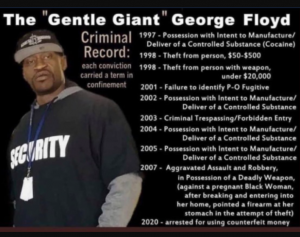 […] There you can find 66400 more Information to that Topic: thehollywoodconservative.us/articles/catholic-university-features-paintings-of-george-floyd-as-jesus-christ/ […]

[…] Information to that Topic: thehollywoodconservative.us/articles/catholic-university-features-paintings-of-george-floyd-as-jesus-christ/ […]

[…] There you can find 56892 additional Info on that Topic: thehollywoodconservative.us/articles/catholic-university-features-paintings-of-george-floyd-as-jesus-christ/ […]