Nina Jankowicz, the woman who President Biden has now tasked with heading up his new Orwellian project: the Disinformation Governance Board, was humiliated on Thursday night after a bizarre video of her singing about thing she claims are ‘fake news’ went viral.

The woman tapped by President Joe Biden to head his new “Disinformation Governance Board” drew widespread mockery on Twitter after a cringeworthy video surfaced of her singing about things she’s deemed fake news went viral.

Nina Jankowicz, an apparent Harry Potter fan and author of “How To Lose the Information War: Russia, Fake News, and the Future of Conflict,” was named this week to head the controversial agency after a stint at the Wilson Center think tank. The video, aired on Fox News Channel’s “Tucker Carlson Tonight,” drew guffaws online, with actor James Woods declaring that it belongs in a time capsule and others wondering if it was a parody and pleading in vain to “unsee it.”

This one absolutely has to go into the 2022 Time Capsule. #MinistryOfTruth pic.twitter.com/gww1JncUZW

“Information laundering is really quite ferocious,” Jankovic begins, channeling Eliza Doolittle. She sings in rapid-fire show-tune style about Rudy Giuliani spreading “bad information” about Ukraine, “TikTok influencers” denying the perils of COVID-19 and urges all to “not support their lies with our wallet, voice or vote.”

This is #NinaJankowicz , Biden's most recent poor decision, who will head The Department of Homeland Security's Disinformation Governance Board.

It is not a parody of her.

Ir is actually her.

That b—– creeps me out along w/ the Biden regime. #ImpeachBidenNow! 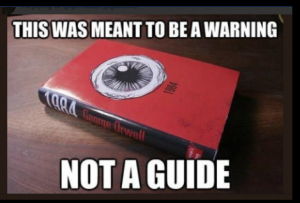 America has been a great country for several hundred years and now idiots who think they are smart want to destroy what was and turn the great USA into a 3rd world communist regime! Wake up people communism means everyone is financially bankrupt except those working in the Government!

Another bad selling point of Communism is that everyone has to serve in the military if they want to or not!

The Communists that have infested Washington D.C. are getting very bold exposing their Marxist goal of destroying the United states from within—Like Joe Stalin said they would do.

DC has been turned into the cuckoo’s nest.

It is interesting that the political party which is heavily populated by chronic liars now wants to establish the “Ministry of Truth” in the nation that was founded on the concept of freedom of speech.

A great voice from the past:
‘If communism is such a great success, instead of an iron curtain, why don’t they put up a picture window?’ — Alfred E. Newman