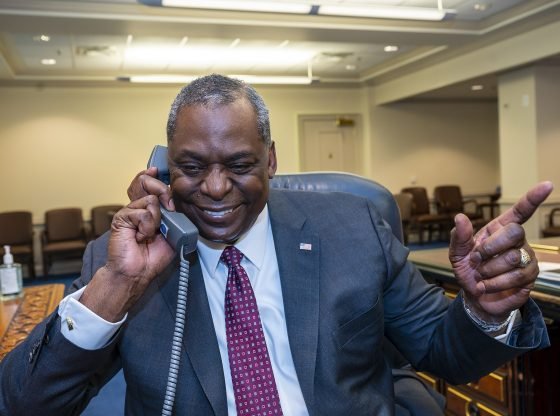 The Biden Administration’s Defense Secretary Lloyd Austin has now approved the use of hundreds of members of the national guard against a potential protest by truckers in Washington, D.C.

According to the National Guard Bureau, Austin approved requests for roughly 400 members of the D.C. National Guard and 300 members from outside of the District of Columbia; the Bureau said none of their members will carry firearms “or take part in law enforcement or domestic-surveillance activities,” ABC News reported, adding, “Officers from Washington’s Metropolitan Police Department will increase patrols on Feb. 22 through March 5, shortly after the State of the Union, according to an internal MPD message obtained by ABC News. The department will also have two rapid response teams ready.”

President Biden is scheduled to deliver his State of the Union address on March 1.

Three convoys have already announced their intentions to travel to the Washington D.C. area: Bob Bolus Towers & Truckers for America, The People’s Convoy, and The American Truckers Freedom Convoy.  The Bolus group was planning on leaving from Scranton, Pennsylvania on Wednesday.

Canadian Prime Minister Justin Trudeau recently declared the equivalent of marshal law to crush a similar demonstration in the Canadian capitol, in the process arresting protestors at gun point and unilaterally freezing their bank accounts.

It appears that the Marxists control the existing administration and are going to act like their allies in the communist controlled countries around the World. Despots ruling like tyrants.

Canadian truckers found they coold push out of the way any blokages by using “Surplus Heavy Tank Haulers” They will need them as the National Gard intends to block routes with parked military vehicles.

Any Semi can push any tank out of their way, all you have to do is use the power divider which turns the rear wheels into basically all wheel drive instead of all of the power going to only 1 axle!!!! Sincerely retired Semi Driver for many decades!

Interesting way to get out of mud and snow—or SNOWFLAKES.

The problem with using Tanks as a blocade device is that they are on steel tracks steel has no traction on asphalt if they used rubber it would help with traction on asphalt but the Semi would still have enough power to make the tanks slip the tracks off of the machine! Ex truck driver and ex Special Forces! If the drivers saw that the tanks were unoccupied if they really wanted to mess with them throw some Tijuana Cocktails inside of them and burn the wiring up then they cannot be driven until completely rewired!

No violence. Too bad the Dems won’t use the National guard to protect citizens from BLM and Antifa , or when trump called for the guard before January 6.

the democrat party no longer exists since the MARXIST took over THE HILL.. Gary

Or to close Our Border with Mexico that is totally OUT OF CONTROL.. Gary

At that point the only way to move them quickly would be to use a heavy lift helicopter!

Why tell them what to do?

America’s middle class is AT WAR with the Tyranny from Washington’s District of Columbia–NEVER A STATE. GARY

These domestic terrorist election crooks want outright war? LETS GIVE IT. FIGHT FOR COUNTRY LIKE MEN. THEY ARE SPINELESS COWARD PUSSIES. VIOLATION OF FIRST AMENDMENT IS OWED SECOND AMENDMENT.

MILITARY TRIBUNALS FOR ALL ACTS OF TREASON…….. gary

Since when did the SecDef receive the authority that only the CinC and respective state Governors have? ? ? ? ? ?
Barry Age 77
PO1 USN RET
Vietnam 3x (Tonkin Gulf Yacht Club)

Hang the traitors in the Washington MALL—bury them all in a common grave , dug for such scum. Gary

This out to be entertaining, u will need many more than 700 guardsman, who will side with the Truckers, this authoritarian,woke government has gone way overboard. It’s time to come back to reality, before this civil war gets out of hand. We don’t need a slaughter on the streets, because of a bunch of woke, white rage, incompetent, politicians/generals pretending to know how America works, by stripping our freedoms away,be very careful with your reaction, to freedom.

THIS IS CIVIL WAR, and Washington is protecting America’s enemies……..gary

I think I’ll invest in popcorn futures. It should be entertaining watching the liberal elite’s heads explode. Maybe that incompetent nincompoop in the White House will finally see how detested he is. His handlers have been hiding the truth from him, and keep him in a delusional bubble.

Clinton (both of them; perhaps webb Hubble’s Daughter as well) need to face trial for treason.

Where all of these NG’s when the cities were being looted set fire and blown up!!!! Business owners beat
and stomped, federal property being destroyed over and over again wide spread????? Where were they???
Oh those scum bags were liberal’s from the left…can’t touch them right Demo’s at their finest!! The Biden
Bunch has everything back asswards!! Total Double Standard. Sickening for sure!!! We can do better, we must
do better……fire the whole Biden Administration ASAP!!!

COAT ALL TRAITORS WITH TAR—just for starters.

Why wasn’t this done Jan 6 it is so easy Pelosi did not care.

Pelosi did care – that it would blow. And shy guaranteed it with infiltrators who agitated and broke the law.

Ask yourself as to why this supposed President destroyed: Energy Independence, THE WALL to protect Us from invasion—-AND OUR FREE INTERNET///???

Nancy , like Biden, is chest deep in COMMUNIST MONEY. Audit her family along with the Biden’s and send them all to prison.

Idi Amin’s big job is to purge the military of conservative voters.

The only people left will be those who are there for a job not to do a job.

His big dream is to be the leader of a military dictatorship in the U.S.A.

Drag the traitors out into THE MALL—-and have them face justice for their crimes like making Us dependent on our Enemies ( Russia and Iran) for ENERGY—-OIL.

CHINA started this world War and the feckless in Our Government refuse to expose the truth that we know to be true.

America need to prepare for war Putin is at a point of no return, Putin is desparate

CHINA IS THE REAL THREAT and Tiawain and the South China Sea ( as well as the Panama Canal) are targets. GARY

I give up as too many are asleep because the China flu has allowed them to make a living sitting on the damned couch. GOOD NITE. GARY

China Joe Biden needs the National Guard to protect his administration from AMERICAN CITIZENS?? WHAT THE HELL?

What haoppened to the Truckers Convoy – did it disappear or miss the DC turn off?

What worthless bastards as they won’t close the *ucking Border with Mexico to protect US from INVASION. Gary